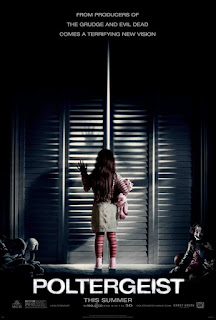 An American family move into a new house. They are immediately met with strange supernatural occurrences. Objects move by themselves. Creepy sounds can be heard at night. Before long their youngest daughter has been taken beyond the normal world, and it is up to a team of paranormal experts to help bring her back. This may sound like the 1982 horror film Poltergeist, but it is now also the synopsis for the near-identical 2015 remake of the same name.

So why remake films? It strikes me that there are three reasons, and any particular remake might exist for a combination of the three in one proportion or another. The first reason is creative: a writer, director or producer sees an old film and recognises a way to re-envisage it or update it for an entirely new audience. It is a transformative process, taking a pre-existing property and advancing it a little in the cultural conversation.

A second reason is to do with language. A fantastic film might be made in Japan, and an American producer knows it would be hugely successful if it was only produced in English. Thus America gets The Ring, The Grudge, The Departed and all other manner of Asia-copied movies. The theory works in the other direction as well: you can see a Hong Kong remake of Cellular if you like, or the Japanese Unforgiven.

Then there is the third, much more prevalent reason, which is that old movies have recognisable titles, and recognisable titles mean a sellable brand to the movie-going public. If you launch a new feature film with an original title, you need to educate the market about what the film is and what sort of story they can expect to see. If you take an old title and concept and recycle it, half of the job in promoting it to the audience is done. Poltergeist is overwhelmingly in existence because of this third reason.

It is worth emphasising that, in itself, the 2015 Poltergeist is not a particularly bad film. It features some striking horror imagery, and throws in a few quite clever ideas in among the original elements from the 1982 film. It is well produced, and has a generally quite strong cast including Sam Rockwell, Rosemary DeWitt and Jared Harris. The juvenile cast seem particularly strong, including Kennedi Clements as the spirited-away Carol Ann as well as Kyle Catlett as her older brother Robbie. At 96 minutes the film also keeps a fairly quick, energised pace.

The core problem, and it's an obvious one, is that while it is a handsome enough production it is almost entirely redundant. There simply is not enough new material on offer here to justify the film's existence. The original 1982 Poltergeist is far from a perfect film, but it is a perfectly entertaining one, and given the choice of rewatching the original or the remake I see no reason to head for the modern edition. This is the kind of film that is utterly disposable. Its title and storyline might attract a general audience (it made about US$95m on its theatrical release) but that audience will likely have forgotten most of the movie by the time they're walking to their cars. The film exists solely to make money, and that is basically all its made. No cultural impact. No contribution to the genre. Just money. Films should do better than this. Audiences can see better than this.
Posted by Grant at 5:07 PM