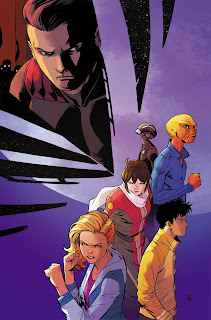 Joyride was initially solicited as a four-issue miniseries, however solid sales and strong word of mouth has led it to become an ongoing series instead. I'm glad: this book has a great core concept, beautiful art and designs by Marcus To, and a set of characters I really want to follow for a whole pile of future issues.

So, to recap: sometime in the far future, a repressive Earth government has closed its entire population off from the broader universe. Three human teenagers have escaped: the idealistic Uma, the love-struck Dewydd, and the reluctant soldier Catrin - recently revealed as the daughter of Earth's dictatorial leader. Together they have stolen a starship, and joined up with an eccentric robot and a cynical alien drifter. This issue sees the pursuing Earth military finally catch up with them, and attempt to take Catrin home.

This is a rock-solid space opera, with a great plot, really likeable characters and stunning artwork. Each issue has endeared itself to me more than the last: like all good stories, the characters are key. As I have read more of Catrin, Uma and Dewydd, I have come to relate to them more. This climactic issue seals the deal: I want to read the further adventures of these runaways for as long as the creative team are willing to tell them. I can see a bright future ahead for this book: a TV or film deal seems a certainty. Why not get in at the ground floor? (5/5)

Under the cut: reviews of Black Road, Black Widow and Usagi Yojimbo.

Backstories are revealed as Magnus and Julia make their way across a frozen lake. This remains a fine historical action series, tapping into Wood's earlier work writing Northlanders for DC Vertigo, but there's a spark that feels missing here. With each issue Black Road has felt just that little bit less urgent and dramatic. I cannot quite put my finger on it, but for some reason there's no real suspense to what is going on. The characters are interesting, and Garry Brown's art is excellent, so I am still enjoying things. At the same time I can't help but feel this could all be better than it is. (3/5)

Another book that is simply failing to quite grab me in the way that it should is Black Widow. Waid, Samnee and Wilson are doing great work, and this issue in particular feels like a very strong one, but at the same time I am expecting more from this creative team than I am getting. It is the problem of raised expectations: they were all so good on Daredevil that I want that level of focus and entertainment in Black Widow. So far I am not quite getting it - although to their credit this issue gets close. (4/5)

The issue marks the middle instalment of Sakai's three-part "The Secret of the Hell Screen". At a temple about to be ceded to a local lord for his hunting grounds, two people have been murdered. The link seems to be an apparently cursed screen inside the temple - one that depicts Hell itself. It is a very neatly composed, quite old-fashioned sort of murder mystery, and Sakai is largely telling it very well. Its only real problem is the conclusion: at the 24-page point the story simply stops, without any proper cliffhanger or temporary resolution. Once collected together it will be a much neater read, but on an issue-by-issue basis it is oddly abrupt. (4/5)
Posted by Grant at 5:08 PM