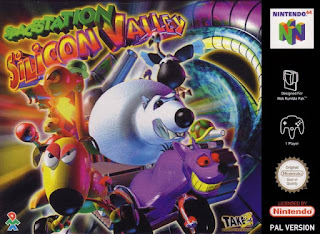 In 1995 British game developer DMA Design signed a contract with distributor BMG Interactive to produce three videogames. One of these, the strategy game Tanktics, was fairly unsuccessful and sank without a trace. The second, Grand Theft Auto, sparked off one of the most successful videogame franchises of all time. The third was Space Station Silicon Valley which, like Tanktics, was a commercial failure. Unlike Tanktics, however, it was widely acclaimed by critics and has since become a strong cult favourite. There seems to be a special sub-set of Nintendo 64 players. They will start discussing their favourite games, one will mention Space Station Silicon Valley and the other player's eyes with just light up with delight - someone else who had the chance to play the game has been found.

The player controls Evo, a robot sent to investigate a long-lost space station containing a variety of animals. Evo crashes rather than docks, and is reduced to a badly damaged slow-moving microchip. To survive Evo must take control of cyborg animals around the station, and then while within them work his way through the station and stop it from colliding with the Earth.

The key part there is about taking over cyborg animals. We are talking steam-powered hippopotamuses and clockwork squirrels. This is wonderfully silly game, with a truckload of imagination and whimsy dumped into it. The game has a great sense of humour about it, and brightly coloured character designs.

In terms of gameplay Space Station Silicon Valley is a three-dimensional platformer with a puzzle element to it. The player moves Evo through four environmental zones, each with a number of different stages and wide ranged of differently-powered animals to control. Like a lot games during the late 1990s there are numerous secret goals and bonus areas - there's a lot of depth in the game for the player to explore.

It is a real tragedy that the market did not take to Space Space Silicon Valley, because it was one of the Nintendo 64's most distinctive and entertaining games. I suspect part of the problem was that BMG launched it at the same time as Nintendo's own The Legend of Zelda: The Ocarina of Time, which would have utterly eclipsed it. I'd love to see the game be revisited and updated some time. It remains one of my favourite N64 titles.
Posted by Grant at 4:55 PM