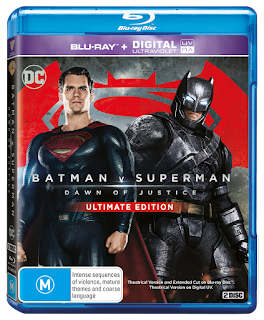 Batman v Superman: Dawn of Justice opened into cinemas earlier this year with a storm of publicity and a huge amount of negative feedback. Most critics were relatively unkind, and audiences - particularly the ardent comic book fans - seemed to generally hate the film. I did not mind it myself, although it is a movie with an enormous number of flaws. Back in March I called it "a poor film with outstanding pieces in it", which still seems to be a pretty fair assessment.

Batman v Superman has now come to home video with a so-called "Ultimate Edition": an extended cut of the film that adds an additional 30 minutes of footage. That brings its running time to a gargantuan three hours and makes it the longest superhero movie of all time. People who found the film too bloated and long back in March are likely running for the hills already.

There are basically three kinds of extended editions. The first is the simple cash-grab: a studio re-releases a film on home video with a couple of minutes of trimmed footage thrown back in and hopes all of the fans re-purchase it. The second is a more creative extended cut, as typified by Peter Jackson's The Lord of the Rings movies, or James Cameron's Aliens. The film released in cinemas was in effect the director's cut, and the additional footage is inserted purely to give the fans a lengthier and oftentimes more satisfying alternative experience. The third kind, which is the one that interests me the most, is the genuine director's cut: the version of the film that the director wanted to release into cinemas the first time around, but which was nixed by the studio. Batman v Superman: Ultimate Edition is that kind of extended cut.

While it seems unlikely that this extended version of the film will convert anybody who hated it in the cinema, it is definitely a vastly improved movie. Director Zack Snyder does not add too many new scenes - although there are a few. What he instead does it add back lines of dialogue and plot developments to scenes that were already there. The effect is to make Batman v Superman a much more intelligible film. Aspects of Lex Luthor's (Jesse Eisenberg) master plan to turn the public against Superman (Henry Cavill) now seem a lot clearer, and make a lot more sense.

The film also develops and enhances the supporting cast, and in doing so creates a wider environment within which Superman and Batman (Ben Affleck) can circle one another. Altogether it achieves a weird effect of being more interesting to watch, and therefore a quicker watch. It may take an extra 30 minutes to get to the end, but if feels at least 15 minutes shorter. I really much preferred the film in this extended incarnation: it is still far from a strong film, but it is stronger than it was. There is at least an intriguing and dramatic plot behind it now, and the only remaining faults are honestly ones of tone and character.

All the extra footage cannot deflect from the core problem that Zack Snyder creates a bleak and unpleasant world for his superheroes. Superman is a self-centred conflicted wreck, and far removed from the confident, upstanding boy scout of the comic books. Batman is a nihilistic, murderous obsessive: in this case it is a take that does actually have some merit, although it would be nice after more than 30 years of successively darker takes on the character get a few more versions where he is at least occasionally happy. The best of the characters remains Wonder Woman (Gal Gadot), and her solo outing next year cannot come fast enough.

To reiterate: if you hated the film in cinemas, your opinion of the "Ultimate Edition" is unlikely to change all that much. Extra dialogue is not going to change the parts of the film that you probably disliked the most. If, like me, you found it a troubled film with some strong elements of merit, then this is definitely a much better edition. If you straight-out adored the theatrical cut - and I have met more than a few people who did - then this new version is an absolute must-see for you. For a director whose credits include Watchmen and Sucker Punch, calling Batman v Superman: Ultimate Edition his second-best film sounds a little like damning with faint praise (his best is still his Dawn of the Dead remake), but I cannot deny that with the extra footage this movie is pretty damned enjoyable.
Posted by Grant at 5:16 PM