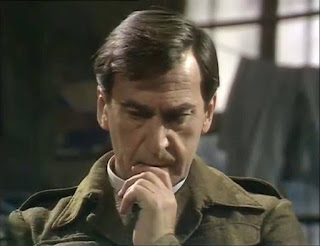 It is 7 November 1972, and time for another episode of Colditz.

After several escape attempts in a row are easily foiled, it becomes clear there is a traitor somewhere among the prisoner's ranks. It turns out to be a Polish officer, who is immediately court-martialled and sentenced to death - unless Colonel Preston (Jack Henley) and the British Catholic chaplain (Patrick Troughton) can convince the Polish officers otherwise.

Asides from a failed escape attempt in the opening scenes, "The Traitor" keeps its focus solely inside Colditz and on the titular traitor that had helped to destroy so much of the prisoners' careful work. The hunt for the traitor's identity takes much less time than one might imagine, leaving the bulk of the episode to issues of forgiveness, honour and personal responsibility. As always it is superbly performed, particularly by Jack Henley and Patrick Troughton, who take up the bulk of the episode's focus.

Patrick Troughton is, of course, most famous for playing the Doctor in Doctor Who between 1966 and 1969. This performance came just three years later, and he plays a remarkably different character. He is only referred to as Padre, and as the only Catholic priest at Colditz he has his hands busy giving communion to and taking confession from officers from all nationalities. He takes his position very seriously - so much so that he already knew the identity of the traitor before Colonel Preston and his men were even aware a traitor existed. He had, after all, heard the guilty man's confession. The episode peaks with a great confrontation between Padre and the Colonel: he could have assisted the escape efforts at any time, but did not because his religious faith forbade it. Henley does a great job expressing Preston's barely contained rage. Troughton does an outstanding job of playing a man forced to withhold information for the greater spiritual good.

Patrick Troughton really was a sensational actor, and Doctor Who enthusiasts that have only ever seen him play their beloved Time Lord should absolutely track down his other roles and see how talented he was. Thanks to a strong script by John Brason, he is able to show multiple sides to Padre as well. He shows his immense frustration when he is unable to convince the Polish commanders to spare the traitor's life. He shows resolve in insisting he stay with the traitor right up to the final moments. When it becomes clear the German guards have arrived to save the man at the last minute, he shows no hesitation in physically stopping the Poles from going through with their execution. It is a shame he only appears in this one episode; he is a fine addition to the series' cast.

The episode does have a downside, in that it fails to let the audience into the world of the Poles themselves. The traitor, Soltizyk (Vernon Morris) has his plight explained by another rather than expressed by himself: he has been blackmailed by the Gestapo and must inform on his fellow officers or have his wife and daughter murdered. He does not even get the benefit of dialogue: we only ever see him fretting or sobbing. At the same time the Poles that have sentenced him to death are presented as a monolithic group: they only have the one opinion, and the manner in which they are described - all honour and inflexibility - feels cursory and gently racist. An episode that opened up to their own separate officers, each with distinct values and personalities, would have made "The Traitor" an even stronger piece. As it stands it is another strong hour, but it could have been ever stronger.
Posted by Grant at 5:11 PM