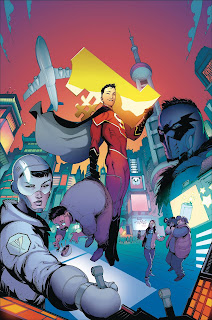 I have always liked it when DC attempts to showcase the superheroes in countries other than the USA. Grant Morrison did the most intriguing job in the last decade or so of introducing super-teams in both Japan and China. Japan got the hilarious Super Young Team, featuring the likes of Most Excellent Superbat and Big Atomic Lantern Boy. They made a few quest appearances before receiving their own miniseries. I was even more enamoured with the Great Ten, a state-sanctioned Chinese superhero team who also got their own limited series - one so unpopular as it turned out that DC cancelled the miniseries before it was completed.

So it seems maybe the market is not as keen on whimsical Asian superheroes as I am, which does not bode well for New Super-Man. It featured Chinese teenager Kenan Kong, who is persuaded to participate in a scientific experiment that gives him the powers of America's Superman. To be honest it feels a lot less inventive than Morrison's Chinese creations like August General in Iron and Accomplished Perfect Physician. It is a very generic origin story about a school bully and arrogant idiot who is clearly going to learn the error of his ways by becoming a superhero. Viktor Bogdanovic and Richard Friend's artwork is competent but not entirely gripping. Gene Luen Yang's script is very by the numbers. I went into this book hoping for something really unusual, and instead found something that is crushingly ordinary. I will give New Super-Man another issue, but I suspect it is not going to last more than eight or nine issues before DC retires the title. It's a shame; foreign superheroes could be so cool. (2/5)

Under the cut: reviews of Action Comics, Daredevil, Descender, and Detective Comics.

Dan Jurgens has certainly inherited a hell of a messy set-up with Action Comics. The pre-Flashpoint Superman has returned, but there's also another Clark Kent here who doesn't appear to be Superman, And Lex Luthor is using New Gods technology to be a Superman all of his own. Together they've been fighting Doomsday for two full issues now. It's reasonably well scripted stuff, and Tyler Kirkham's art has a nice mid-1990s sort of energetic appeal, but two issues of punching each other seems like a very long time, and the fight hasn't ended by the time the issue has. This issue is also very badly disrupted by a three-page advertisement for Snickers chocolate bars, styled as a comic strip in which Batman and Superman face Doomsday. In a book like New Super-Man it is merely very annoying. In a comic like this, where Superman actually is fighting Doomsday, it does momentarily look like Batman turns up to offer Doomsday a Snickers. That stuff can really ruin a narrative. (2/5)

There is something both wonderful and wonderfully old-fashioned about the superhero team-up. It is a chance to see two characters, usually confined to their own books, interact and work together in a manner that doesn't happen that often. Team books do not really count, since there are usually so many characters in each issue that no two get sufficient time to really build something over the course of 20-odd pages. This issue does it wonderfully, with Daredevil and Spider-Man teaming up in a Macau casino to steal a mysterious briefcase. It's funny, exciting, well illustrated, and best of all it actually ties into an overall story arc in a neat and unobtrusive fashion. This is a great superhero comic, and the first properly great issue of Daredevil since Soule took over the book. I really hope this is a sign for the future. (5/5)

Descender #13 provides some back story on Tesla: her experience when the Harvesters came, her fractious relationship with her father, and the path that led her to her current predicament. While it is good to see the character get fleshed out, I am wondering if it is the best move to flesh out the series cast in this fashion - one issue per character, all in a row. While it helps to give the overall story some depth and context, it does grind the story's momentum to an almost total halt. Dustin Nguyen's subtle, almost deliberately vague artwork keeps the book looking distinctive, but I really want the pace to pick up sooner rather than later. (3/5)

A fill-in artist just three issues in would normally be cause for alarm, but Alvaro Martinez does a great job and I suspect this sort of artist jump-around is going to be standard practice while DC employ their fortnightly shipping schedule. This is a stunning issue, with a great plot progression, what I think might be the first post-Flashpoint appearance of fan favourite Renee Montoya, and a plot development that is surprising and well thought-out. I was not entirely sold on James Tynion's storyline, but this issue has changed my mind 180-degrees. It's a sensational comic. (5/5)
Posted by Grant at 10:56 PM