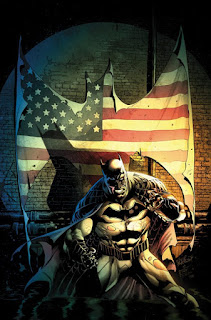 James Tynion IV's re-envisaging of Detective Comics as a team book has not particularly worked for its first few issues. It all felt a little messy and fractured, and seemed to suffer the most from sidelining Batman in his own book. That all appears to stop with this latest issue, #937, as both Batman finally gets some of the spotlight back, and Tynion's team - consisting of Batwoman, Red Robin, Spoiler, Orphan and Clayface - finally appears to click together.

The premise of this storyline's threat is a pretty great one: essentially an attempt to co-opt Batman's methods and technology and to militarise it for the United States government. There is a personal element in that the mastermind of this group - known as the Colony - is Kate Kane's father, and as a result also Bruce Wayne's uncle. It was a clever move to make Jacob Kane the antagonist, because it piles a personal element on top of a relatively impersonal enemy. It raises the stakes wonderfully.

Early scenes really showcase Batman's skill in escaping capture and turning the tables on his captors. The issue's middle section continues to define and showcase his assembled team. Red Robin in particular is highlighted this time around, which pleases me as a big fan of the character. At the climax both threads come together: issue #938 looks set to be pretty action-packed. Hopefully this newfound quality continues in the coming weeks. If it does this may well become one of DC Rebirth's must-reads. (5/5)

Under the cut: reviews of Action Comics, Batgirl, Ms Marvel and Nightwing.

Wonder Woman joins the fray this issue, which not only ups the action stakes in the fight with Doomsday but also adds a personal element. Diana was in a romantic relationship with the New 52 Superman before he died, and this issue includes her first proper conversation with his pre-New 52 doppelganger. Despite the good material provided by Diana's presence, the issue still continues with a rolling fist-fight against Doomsday that has now stretched over almost four whole issues. For this book to keeps its readers on a long-term basis, it really needs to provide something beyond the only never-ending battle. (3/5)

Another DC Rebirth relaunch begins, with Batgirl leaving the Gotham suburb of Burnside and heading on a backpacking trip across Asia. This issue sees her in Japan, where she unexpectedly meets a childhood friend and then has to defend him from an assassin's attack. This is a pleasantly readable comic, but that really is about the extent of it. The characters are likeable, and the introduction of a 104 year-old former superheroine named Fruit Bat makes me keen to see a one shot or miniseries showing her off in her prime. I do particularly like Arbuquerque's artwork - hopefully he will stick around for a few issues at least. (3/5)

So another Civil War II tie-in, although to G. Willow Wilson's credit she has managed to find an angle that both satisfies Marvel's need for a tie-in and tells an independently strong story for ongoing readers. Kamala has been roped in by her idol Captain Marvel to help stop crimes before they occur - thanks to the powers of a young man who can predict the future. Now one of her friends has been taken into custody for a crime he has not yet committed, and Kamala is now stuck between duty to Captain Marvel and her loyalty to her friends. It's perfect teen drama in superhero form, and paired with Miyazawa and Alphona's excellent artwork it's a really stunning book. On top of everything else, a series of prologues regarding Kamala's family history continue. This is just a flat-out great comic book. (5/5)

Nightwing has been gone for a while now, having been replaced by Grayson in the aftermath of the Forever Evil miniseries. Now he is back in costume, apparently blackmailed to work for the international Parliament of Owls criminal organisation, but secretly working on a plan to destroy them from within. It's great to see Dick Grayson back in action, but there is nothing in this issue that particularly stands out or makes it feel like a must-read. It's competently assembled, certainly, but there are a lot of comics like that. I am waiting for the hook to make this book become worth singling out for attention. (3/5)
Posted by Grant at 11:36 AM