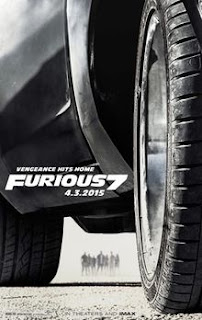 The most knowingly ridiculous action movie franchise of all time reaches its seventh instalment with Furious 7. It is such an over-the-top affair that it has effectively rendered itself critic-proof. What is there to criticise? You could remark upon how unbelievable the stunts are, or what a nonsense the plot is, or how there is not a single realistic character in the bunch, but to do so would be pointless because the filmmakers already know. These are films that embrace and encourage their own silliness. Without question Furious 7 is the silliest of the bunch.

Following the defeat of Owen Shaw (Luke Evans), who has been left in a coma, Dom Toretto (Vin Diesel) and his gang are targeted for reprisals by Owen's much more dangerous brother Deckard Shaw (Jason Statham). To track down Deckard and challenge him head-on, Dom agrees to work with "Mr Nobody" (Kurt Russell) - a US government representative who needs to rescue a talented hacker from an African terrorist in order to secure the world's greatest-ever surveillance system. The chase takes Dom's team from Los Angeles to Azebaijan to Abu Dhabi and back to Los Angeles for an explosive chase through the city streets. The simpler plot synopsis would read: "A string of random nonsense allows Dom and his team to drive cars very fast, shoot people, and blow things up for 137 minutes."

One of the biggest drawcards of the Furious movies as they have developed is how they seem to actively encourage actors to exaggerate their own on-screen personas. Dwayne Johnson does not simply play one of his typical action roles: he plays his ultimate action role. Similarly new antagonist Deckard Shaw is played by Jason Statham as the most exaggerated version of his "British hard man" character from numerous other action films. Kurt Russell seems to be in the film purely for the audience to be excited that Kurt Russell is in the film. And the crazy thing is we are. This film is an absolute joy to watch because it is so much fun watching Russell, Johnson, Statham and Diesel play such over-the-top versions of themselves. It has no aim other than to entertain and amuse. I particularly enjoyed the appearances by Tony Jaa and Djimon Hounsou, two actors for whom I have an awful lot of time.

Familiarity in this case breeds affection. We know the stunts and action set pieces are, by this stage of the franchise, going to be impossible and ridiculous. We enjoy them all the same. We know Vin Diesel is going to mention 'family' a lot, and if you are anything like me you are going to laugh every time he says it. You know the moment Ronda Rousey shows up that she is going to have a knock-down fist-fight with Michelle Rodriguez. The film refuses to play with audience expectations, and instead simply meets those expectations. As I suggested earlier, this sort of filmmaking renders itself critic-proof, because what is there to criticise? The film is very open about what it is going to do, and it does it wonderfully.

James Wan takes over directing from Justin Lin, who helmed the previous three instalments, and does a very slick job of it. This is his first film outside of the horror genre, and he has managed to adapt to it very well while keeping his own aesthetic (there is more than a little of Saw in how the camera moves). He has also pulled the film through pretty much every director's worst nightmare: having a lead actor die halfway through production.

Paul Walker's death could have derailed the entire film, but thanks to Universal's sensitive handling of the tragedy - they shut down the production until everyone was ready to continue, and delayed the film's release by a year - and Wan's direction, it pulls through not only intact but as a genuinely affecting tribute to Walker. The crass escape of killing his character off is not taken, and instead Brian is allowed to walk into the sunset, figuratively speaking, leaving his criminal past behind him. The film's extended epilogue is honestly one of the sweetest and most emotionally effective things the franchise has done. Everyone involved should be very proud.

There is always a risk of diminishing returns with these kinds of franchises, and to be honest this seventh film does not quite hit the peaks of the fifth and sixth ones. It is still huge value for money though, and a tremendously fun time for anyone willing to take the ride.
Posted by Grant at 7:40 AM