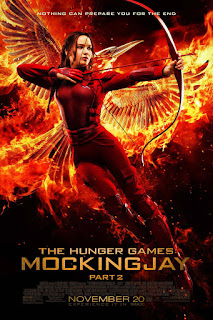 With civil war exploding across PanEm, rebel figurehead Katniss Everdeen (Jennifer Lawrence) makes a dangerous journey into the capital with the hope of finally meeting President Snow (Donald Sutherland) face-to-face. On the way she must help Peeta (Josh Hutcherson) recover from his torture at Snow's hands, and to finally decide which of her two suitors - Peeta and Gael (Liam Hemsworth) - she really loves.

Mockingjay Part II continues Hollywood's love for splitting adaptations of single books into multiple parts. Harry Potter and the Deathly Hallows was split into two, the final Twilight film was split into two, and The Hobbit was even split into three. It is a strategy that certainly makes a mercenary kind of financial sense - double the films and double the revenue - and can arguably make narrative sense if one novel's climactic narrative really is too long and dense to fit into a single movie. It often winds up straddling some sort of middle ground, however, so The Deathly Hallows wound up with a rather slow and padded first half followed by a dramatic and entertaining second. I worry the opposite has happened with Mockingjay. The first film was really very good, but this second half - and final film for the franchise - is really quite sedate and maudlin for what should be an emotional finale.

It is not simply that the film seems sparsely plotted, it is that whatever plot is included feels regularly short-changed and cheated out of a conclusion. We begin with a brain-washed Peeta desperate to murder Katniss but, one half-hearted attempt aside, he simply recovers over the course of the film and finishes up back in love with her again. The bulk of the film is taken up with Katniss infiltrating a booby-trapped capital, but for all the proclaimed mentions of "welcome to the final Hunger Games" it is a fairly linear and simplistic experience. When the time finally comes to storm Snow's mansion, Katniss is unconscious within 30 seconds of the final assault beginning.

Perhaps this is all intentional. The entire four-film saga has, after all, focused on the most reluctant and traumatised action star of all time. Katniss Everdeen: a combatant because she wanted to spare her sister, and a folk hero because she was in the right place at the right time. For four films she has hesitated, argued, sobbed and shook over the lives she has taken and the danger in which he has been placed. Perhaps after subverting the idea of the action hero all this time, it is only appropriate to subvert our idea of the action movie climax as well.

I am not convinced. There is a narrative weakness to Mockingjay Part II that Part I did not have. Jennifer Lawrence still does an exceptional job of playing Katniss, and I found her emotional turmoil is what pulled me through the film, but at the same time it seemed a pretty ordinary film through which which I was being pulled. It is really only after the war has ended, and Katniss finds herself forced to decide what kind of future PanEm should have, that things pick up a little and become interesting. The film's denouement is long - although thankfully not Lord of the Rings long - but does finally wind up on a very beautiful, emotive note.

In the end I feel there was likely a very solid three-hour finale to be made out of Mockingjay, but by stretching the story to four hours over two films Lionsgate simply spread it all too thinly. It is a reasonably satisfying conclusion, but at the same time it is a slightly disappointing one.
Posted by Grant at 11:54 PM