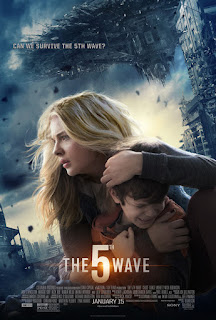 Cassie (Chloe Grace Moretz) is a typical American teenager living in Ohio, whose life is thrown into turmoil when the Earth is visited by a massive alien artefact. It immediately strikes the Earth with a series of increasingly devastating attacks: an electro-magnetic pulse (the so-called 'first wave'), mass earthquakes and tsunamis (the 'second wave'), and a modified avian flu (the 'third wave'). Relocated to a refugee camp with her father and young brother, Cassie is thrown by misadventure into the fight against the fourth and fifth waves.

Young adult fiction has been running on an all-time high in recent years, with scores of best-selling books - usually speculative fiction trilogies - pitting teenage protagonists against love, romance, the end of the world, near-and-far future dystopias and magical worlds. As many of these books have become successful with young readers, so Hollywood has come knocking with an open cheque book, and correspondingly cinemas have been awash with young adult adaptations for a solid decade now. Twilight. The Hunger Games. Divergent. I Am Number Four. The Maze Runner. By now the craze has well surpassed saturation point, and it is becoming pretty difficult for an individual film to rise over the tide and actually stand out in any memorable way. The 5th Wave, which is based on a novel by Rick Yancey, fails in this regard. It is an essentially watchable film, but does nothing to be original or even particularly memorable. This is the sort of movie that simply fills up two hours in between watching more interesting films.

Ever since playing Hit Girl in Kick Ass, Chloe Grace Moretz has been giving some very strong performances in a string of interesting films. She feels a little bit wasted here: she has the demonstrated talent to play a complex character, but instead she is playing someone rather simplistic and - to be brutally honest - a bit dull. She is still the stand-out performer among the cast, however, which seems to be divided between talented adults freely slumming it (Liev Shreiber, Maria Bello, Ron Livingston) and attractive twenty-somethings clearly hired more for their clean looks than their acting ability (Alex Roe, Nick Robinson). Everybody in this film feels as if they exist to perform a plot function, and nothing more. Characterisation is perfunctory, and often-times apparently redundant.

The plot is simple too: after the military come into the camp, take away all the children and kill all of the adults, it splits into two parallel storylines. In one of them, Cassie and an attractive young man named Evan (Alex Roe) trek through the Ohio woodlands to reach the Air Force base where Cassie's little brother is being held. In the other, that same brother is roped into a child army being trained by Colonel Vosch (Liev Schreiber) to fight against the rapidly-approaching 'fifth wave'. Cassie and Evan's journey is particularly dull. The army training story is a little more interesting, but suffers from over-the-top broad strokes characterisation and some pretty extensive stretches of credulity. Most striking in this sequence - for both good and bad - is Maika Monroe as "Ringer", a rebellious and permanently cross teenage girl who seems to be the only girl in the apocalypse with the time and resources to put on goth make-up every morning. She is a tremendous cliche, but at least she grabs ones attention with all of her shouting and violent aggression.

The two storylines do unite, as one would expect, giving the film just enough time to cobble together a fairly ordinary climax and an open-ended conclusion that positively screams of an inevitable sequel. Given the film's fairly moribund box office, I am not sure Sony will bother putting a second film into production.

If your standards for these kinds of films are pretty low or forgiving, there is a reasonable chance you might enjoy The 5th Wave. After all it does not sit at the bottom of barrel - but it can see the bottom from where it is. More discerning viewers are advised to seek their teen-based action-adventure from somewhere else.
Posted by Grant at 4:59 PM