Roadies: "Life is a Carnival" 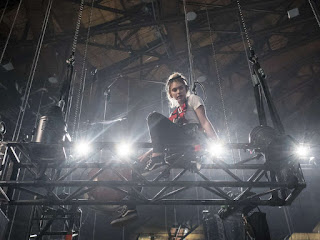 The popular Staton-House Band rolls into New Orleans for a stadium concert, and their road crew - known as "Roadies" make preparations for the evening's event. Tour manager Bill (Luke Wilson) has slept with the producer's 22 year-old daughter, rigger Kelly-Ann (Imogen Poots) is preparing to quit to go to film school in New York, production manager Shelli (Carla Gugino) stresses over whether to stay or join her husband on a Taylor Swift tour, and a groupie with a restraining order is loose backstage.

Roadies is a new lighthearted drama series (I kind of loathe the term 'dramedy') from writer/director Cameron Crowe. He brings with him an awful lot of cultural cache: at the age of 16 he went on the road with the Allman Brothers Band and sold the story to Rolling Stone magazine. He subsequently became one of the magazine's contributing editors. As a feature film writer and director he gave the world Fast Times at Ridgemont High, Say Anything, Singles, Jerry Maguire and Almost Famous. His films are renowned for their extensive and informed use of popular music in their soundtracks. Put simply: if one wanted to make a television drama about life backstage with a stadium rock band, Cameron Crowe is likely the first creative to whom you would speak.

Heading into the series, all the signs are positive. Crowe has not only created Roadies but written and directed this first episode. The series is being produced by Crowe, along with J.J. Abrams and Winnie Holzman (My So-Called Life). The cast includes a line-up of impressive talent, including Imogen Poots, Luke Wilson, Keisha Castle-Hughes, Luis Guzman and Carla Gugino. It is therefore a pity to find that, despite all of the effort and talent involved, Roadies is a pretty colossal misfire.

I think it is important to excuse the cast, who clearly put in a lot of effort and are all visibly talented. Imogen Poots is a particular highlight as Kelly-Ann, acting as a viewpoint for the audience and giving an honest and heartfelt performance. If I am to continue watching the series - and this point that is really uncertain - it will be to see how her character develops over the following nine episodes.

Crowe directs this premiere episode as well as you would expect. It's clear a fair amount of money has been thrown at Roadies, purely from the extensive musical soundtrack and the fairly large-scale cinematography. His script, however, scrapes the bottom of the barrel. Every character seems a stereotype. Every plot development is a cliche. Ten minutes in it is possible to anticipate the remaining 45 minutes down to individual story beats and lines of dialogue.

Take Kelly-Ann, for example. She is hours away from flying out to New York to go to film school. Her short film that afforded her entry is a compilation of scenes in Hollywood movies where characters have a sudden realisation and go running to take control of their own destiny. She edited it together to showcase how fake such scenes are, and how such moments never occur in real life. Now estimate the likelihood that by the episode's climax Kelly-Ann will have a sudden realisation herself, abandon her dreams of film-making and go running back to keep working as a roadie for the Staten-House Band. It is so cynically and weakly assembled that it begs to be ridiculed. The really offensive part is that the episode does not simply come across as creatively lazy - and it does - but actively smug at the same time.

To be honest the series that "Live is a Carnival" most reminded me of was Aaron Sorkin's abortive Studio 60 on the Sunset Strip. That too took a talented cast of actors, a setting with potential, and then half-drove it into the ground with obvious writing and an over-inflated sense of gravitas. I actually had a lot of time for Studio 60. It remains Sorkin's least accomplished television work, but it managed to squeeze a lot of gems in there. So far Roadies has failed to do that, and if you stumble out of the gate this badly in television, it's a solid bet your series won't be around for long.
Posted by Grant at 5:00 PM