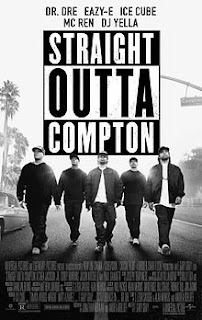 Musical biographies are a popular genre for Hollywood. I think in many respects it is because they come with their own ready-made soundtrack and fan base, but ultimately their success or failure relies on the featured musicians having interesting stories to tell. There is certainly a very interesting story in F. Gary Gray's Straight Outta Compton, which follows the lives of Dr Dre, Eazy-E, MC Ren, Ice Cube and DJ Yella. Together they formed the hugely significant West Coast hip hop band N.W.A.

The film tracks the lives of the band members, favouring Dre, Eazy and Cube in particular, from their initial partnership in the late 1980s to a somewhat tragic conclusion in 1995. It is a complex film with a lot of good and bad aspects to it, but ultimately Gray zeroes in on enough key elements to the N.W.A. story to make it a most worthy addition to the canon of quality musical biopics. It also feels like a deeply personal film: O'Shea Jackson Jr makes his screen debut playing his own father Ice Cube, Cube and Dr Dre both had a hand in producing the film, and F. Gary Gray's first film as director was Ice Cube's cult comedy Friday.

First and foremost it is worth talking about the film's performances. They are tremendously strong and perfectly cast against their real-life counterparts. Corey Taylor is particularly strong as Dr Dre, showing off a lot of nuance and intelligence. O'Shea Jackson Jr replicates his father's burning intensity and passion. Of the lead cast Jason Mitchell has the greatest character arc, as Eazy-E goes from reluctant rapper to break-out star to financially troubled producer and beyond. It is important that the lead performances are as strong as they are, because they ensure Straight Outta Compton is a film about people, rather than just a film about hip hop.

The film's first half is particularly strong, juxtaposing the band's developing style with the racially-charged environment that surrounds them. We get to see the police harassment towards the African American community in Compton. The film takes its time to paint a deeply unpleasant and oppressive picture of late 1980s Los Angeles. By the time N.W.A. record their most iconic song "Fuck tha Police" it is not just readily explained but overwhelmingly cathartic. The transition from the band being bullied and demeaned by police officers right outside their record studio, to them stepping into a recording booth and recording the first line of the song, is one of the most effective moments in cinema I've seen in a while. While not all viewers are going to appreciate the sound of West Coast hip hop and gangsta rap, I am deeply appreciate of how effectively Gray drives home the historical influence of N.W.A. 'Our art is a reflection of our reality,' explains Ice Cube in one press conference scene. It is great to see a political, socially relevant art form get its due.

Sadly other West Coast outfits of the period do not get any sort of credit or profile, such as Ice-T and Cypress Hill. Other artists do, such as Tupac Shakur and Snoop Dogg, but only because they were produced by Dr Dre. On the other hand it's understandable, since this is N.W.A.'s movie, but on the other it feels like a chance to properly contextualise the band has been missed.

Also missing from the movie are most traces of women, unless they are wives, girlfriends or half-naked groupies. Not only are historically important female rappers and musicians excised from the story, so are numerous recorded instances of violence against women. It makes for an uncomfortable watch: Dr Dre in particular had a lengthy history of abuse and violence, and while he has openly apologised for the behaviour of his youth it is rather uncomfortable to see it erased from his life story in a film that he has personally produced.

The second half of the film struggles dramatically, since between the band's initial rise and the death of one of its members there is little to cover other than millionaire rappers arguing about recording contracts. Paul Giamatti is typically solid as N.W.A. producer Jerry Heller, although he struggles beneath a remarkably odd wig. R. Marcos Taylor casts an impressively ominous shadow over proceedings as the violent music producer Suge Knight - a man so notorious he likely warrants a film adaptation of his own. While the film continues to glimmer here and there in its later acts, it really does struggle to find an appropriate way to hit a conclusion.

Despite this patchy second half, Straight Outta Compton is an overall great, dramatically powerful film that shines a light on an aspect of rap music that all too often gets ignored by its detractors. It is will worth checking out, flaws and all, whether you're a fan of the music or a complete stranger to it. Just remember to do a bit of reading afterwards to fill in the gaps that the screenplay leaves out.
Posted by Grant at 5:23 PM