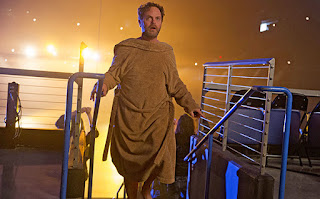 It is not a surprise to see Roadies introduce a straw-man snooty critic upon whom Cameron Crowe can unload all of his resentment and aggression. It is a common thing for put-upon and widely criticised filmmakers to introduce into their films or TV shows. The poster child for this kind of behaviour is almost certainly M. Night Shyamalan, who not only parodied an arrogant film critic in his film The Lady in the Water but had him eaten by wolves as well. Dean Devlin and Roland Emmerich sneaked a cruel parody of Roger Ebert into their 1997 Godzilla remake. George Lucas named his evil henchman in Willow after Pauline Kael.

Here Cameron Crowe goes for a much more literal approach: Bryce Newman is an egotistical elitist who, while under the influence of magic mushrooms, openly admits to the crowd that he does not even listen to the music he reviews. He seems an obvious stand-in for every critic who slammed Crowe's recent output, and a slightly pathetic chance for Crowe to accuse them of not remotely knowing what they are talking about. After all, how could they if they criticised Crowe's films? It's a sad, sorry hit piece from a director who has been rightfully slammed by the critics for a growing list of awful films. We Bought a Zoo. Aloha. Elizabethtown. I am not surprised to discover Crowe is yet another thin-skinned, self-important artist, who can take his place next to The Gods of Egypt's Alex Proyas as one of 2016's great industry dummy-spitters.

Of course there is every chance this is all a coincidence, and Crowe did not even think of his recent treatment by film critics when writing "The Bryce Newman Letter". In that case his mistake is not succumbing to vanity but instead simply being monumentally tone-deaf as to how such a story would likely be received.

Critics and reviewers have a job, and while it is one that will often rub an artist up the wrong way it remains a valuable addition to the entire cycle of art. There is simply too much content in the world these days: too many books, too many films, and definitely way too many American television shows. It would be impossible for someone to consume it all. Critics serve a valuable purpose in letting their readers sort the wheat from the chaff. If you can find a critic whose taste aligns with your own, they are an absolute godsend. As a part of their work, critics are going to rub artists up the wrong way. Nobody likes being told their art is no good. The answer, however, is not to demonise or malign critics, but to take a step back, think about what they wrote, and make better art. Ridiculing critics in the manner that Crowe does here just makes him look petty, and a little bitter, and certainly doesn't help his series.

Truth be told the weak critic storyline is only half of Roadies' problem. This continues to be an oddly smug and bizarrely awful comedy-drama. The dramatic sections are overblown and exaggerated like a bad Hollywood production. The comedic sections either fall back on ridiculously tired schtick - a buttoned-down prissy critic running around naked on drugs? - or simply do not work. There is a nice guest appearance by Lindsey Buckingham, but in all honesty that is about it. A lot of talented actors valiantly attempt to save the episode from its script, but it's an unwinnable battle.

I am disturbed by how addicted I am to this series. It is dreadful, but it is that special kind of dreadful where you have to keep watching in order to find out how deep the rabbit hole goes. This particular hole seems very deep, and with its third episode it's gone deeper than ever.
Posted by Grant at 9:02 AM