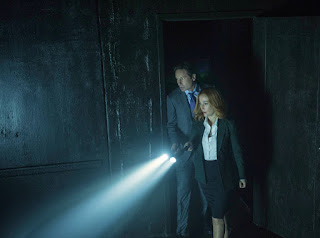 It is 8 February 2016 and time for another episode of The X-Files.

A run-down part of Philadelphia is being redeveloped and gentrified, which means relocating all of the homeless people currently living on the streets. Mulder (David Duchovny) and Scully (Gillian Anderson) are called in when a Federal employee faciliating the removal is brutally murdered. While Mulder tracks down the mysterious killer, Scully receives upsetting news much closer to home.

"Home Again", which marks the series return of writer/director Glen Morgan - who use to co-write with James Wong ("Founder's Mutation") - is a weird blend of old-school monster-of-the-week thrills with weirdly awkward melodrama. The result does contain sufficient X-Files scares and weirdness to entertain the viewer, but due to Scully's personal sub-plot it is a pretty shaky experience.

The killings are the work of the "Band-Aid Nose Man", a lumbering silent man coated in goo with a band-aid stuck across his nostrils. He effectively climbs out of the back of a garbage truck, physically rips his victims in half, and then climbs back into the back of the truck to leave. He is fairly effective, but I think it is fair to say he will not be remembered in the same way as other more iconic X-Files villains like the Flukeman or Eugene Tooms. As with the last two episodes, however, he does bring back a pleasant nostalgia regarding the series in its prime. Some of the series' best episodes were based around the so-called "monster-of-the-week" storylines.

There are some beautifully staged sequences here, but it is slightly difficult to build tension when the episode keeps cutting across to its sub-plot. Scully's mother Margaret (Sheila Larkin) has experienced a heart attack, and lies in a coma in a Washington D.C. hospital. Her last conscious words were a plea to see Charlie, a previously-unseen fourth Scully sibling. With a giant Frankenstein's Monster ripping people's arms off in Philadelphia it is a little difficult to engage with Scully's torment over what her mother's words mean, why she carries a quarter coin on a pendant, and why she suddenly wants to see her estranged youngest son after many years of separation.

Scully's sub-plot feels as if it should work. This is not the first parental death in The X-Files; in fact it's the fourth. Previous episodes have ably demonstrated the grief and trauma that occur in these situations, yet despite Gillian Anderson's best acting efforts the entire sequence feels oddly flat and ordinary. It is not helped that neither of Scully's brothers - Bill Jr or Charlie - actually turn up in the episode. We also do not get an explanation for the mysterious coin her mother was wearing around her neck. There's an odd moment at the end which shoe-horns her mother's death into her ongoing upset over giving up her son William for adoption. That's twice in the space of three episodes William has come up, which suggests he is coming back any episode now.

The weak explanations also affect the Band-Aid Nose Man. Mulder and Scully do stumble upon his creator, the anonymous "Trashman", but rather than a clear explanation or a clear mystery they are told some nonsensical babble about Tibetan Tulpas. It is the weakest possible way to clarify the creature's origins - better to leave it entirely creepy and unexplained.

The scary bits are pretty fun. The rest is pretty tedious. It does squeeze through to the good side of mediocrity, but it's a close-run thing. This revived series continues to deliver nostalgia and tedium in equal measure. At this point I'm feeling if the production does return for an 11th season, it desperately needs some fresh writers to kickstart the franchise into the 2010s. Three good episodes out of four does give the season a quality ratio of 75 per cent, but it's a terribly weak 75 per cent.
Posted by Grant at 5:06 PM