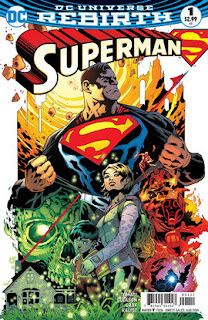 To be honest this is a pretty complicated set-up that is going to hurt this book's sales. For some reason a straight-forward Superman action comic is anathema to DC Comics these days, and they feel forced to over-complicate the storyline with new powers, changed identities, multiple Supermen and bloated cross-title story arcs. The bottom line for this issue's plot: young Jonathan Kent is inheriting his father's powers, and does not know how to control them.

It is an interesting set-up for a superhero comic, but I do feel slightly disappointed that we are not simply getting a great Superman title. This first issue already feels like a "Son of Superman" book instead, and I think DC are misjudging slightly by following this angle. Patrick Gleason and Mick Gray's artwork is strong as always, but it just feels a little bit underwhelming. Hopefully future issues will pick up. (3/5)

There's a bit of a lull in this issue that is rather welcome. It gives the storyline time to breathe, and for back story and current events to finally line up and make a bit of sense. That said, there is still something a little lacklustre about this whole comic. Waid and Samnee did remarkable work on Daredevil, and I desperately wanted this book to match it in quality. Instead it never quite manages to gel together. Scenes that should be thrilling are merely interesting. A plot that should twist and turn feels a trifle dull. It's not a bad comic, but it should be a great comic. (3/5)

Dungeons & Dragons: Shadow of the Vampire #2

A band of wayward heroes have been sucked into the parallel world of Ravenloft. For the average reader that mean very little, but for dedicated Dungeons & Dragons fans that means a world of gothic supernatural horror. What is a bit surprising, however, is that Zub plays this up not for horror but comedy: his group of adventurers are ridiculously silly and over-the-top, acting less like fantasy characters and more like actual Dungeons & Dragons players. It's pretty funny stuff. (3/5)

Green Arrow #1 kicks off right where Green Arrow Rebirth finished: there are a crowd of Nosferatu-like individuals trading in kidnapped homeless people beneath the streets of Seattle. Oliver Queen continues to investigate with the help of Diana Lance, aka Black Canary. Percy writes their relationship brilliantly: they are unaware that, had the DC Universe not been interfered with, they should be husband and wife. Instead they veer between mutual attraction and deep suspicion on Canary's part. Otto Schmidt's artwork is distinctive and appealing. Of the few Rebirth books I have sampled so far, this is my favourite. (4/5)

We're 10 issues into this comic book revival of Invader Zim, and an unfortunate pattern has emerged. Put simply: this comic is really only worth reading when creator Jhonen Vasquez contributes to writing it. His dialogue and idiosyncratic touches are what makes the characters work, and without him the whole book feels like a slightly desperate impersonation. Sadly this issue is one of the Vasquez-free ones. While it has a very funny moments, it's generally pretty underwhelming stuff. (2/5)
Posted by Grant at 8:06 AM