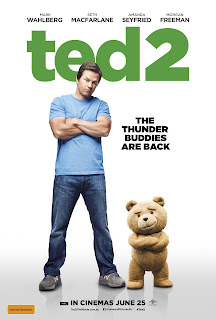 When his marriage to Tammy-Lynn (Jessica Barth) begins to fail, Ted (Seth McFarlane) decides they should have a baby. The attempt leads to the government declaring that Ted is not a person but instead merely property, sending him, his best friend John (Mark Wahlberg) and junior lawyer Samantha (Amanda Seyfried) on a civil rights crusade.

There is a general rule of diminishing returns when it comes to sequels, and that seems doubly so for sequels to comedies. Generally speaking the jokes have already been played out, and there is a tendency to avoid pushing characters into new or original settings or plots. More often than not you get a story that broadly copies the original, or one that - while progressing beyond the narrative - presents something riddled with stereotypes and cliches. It is very difficult to find a genuinely good comedy sequel. It is pretty much impossible to find one funnier than the original. All that is true of Ted 2. The film copies a lot of the jokes from the first film, or at least presents simple variations of them, and its storyline is a dreadfully weak story about Ted going to prove he is a person while being hunted down by an evil toy company wanting to reverse-engineer him and manufacture millions of Teds.

The weak plot is not a surprise. Seth McFarlane is an odd sort of comedy writer/director. His long-running animated series Family Guy has demonstrated at length that McFarlane has the ability to construct a funny joke, particularly if it involves a non-sequitur or pop culture reference. He has a scattershot approach, in that two jokes might fall completely flat but the third makes one laugh out loud. What he categorically lacks is an ability to plot. To an extent Ted papered over this shortcoming with its characters and weird segue involving Flash Gordon star Sam Jones. Ted 2 has no such luck. It is a boring story told in a fairly rudimentary fashion, and there simply are not as many jokes and gags to hide that the second time around.

Mark Wahlberg and Amanda Seyfried both give commendable performances with relatively scant material with which to work. A couple of celebrities and minor cult TV stars crop up, but their appearances feel like stunts and more often than not don't add a lot of value to the film. Seth McFarlane provides the voice of Ted once again, but if you've seen an episode of Family Guy then you have seen this schtick before.

There are jokes that work - it simply doesn't feel as if there are a lot of them. The original Ted managed to overwhelm its weaknesses with enough comedy that you could by-and-large go with it and have a good time. Ted 2 does not quite manage the same feat. While there's a narrow divide between the two films in quality, it is enough of a divide to make the first worth recommending and the second best left alone. If you watched the original and really enjoyed it, you may find Ted 2 more palatable than I did. If, like me, you sort of enjoyed the original with a lot of caveats, then you are probably better off watching something else.
Posted by Grant at 10:40 PM