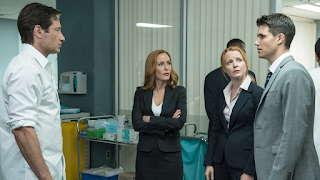 Two Muslim suicide bombers commit a mass murder in an art gallery. One of the bombers has survived but lies in a vegetative state. In two separate attempts to contact the man and discover the location of his terrorist cell, Mulder (David Duchovny) and Scully (Gillian Anderson) team up with two young FBI agents.

"Babylon" is a red-hot mess. There are scenes where the viewer is clearly expected to engage on a dramatic level, but there are also scenes that provide the same kind of overt comedy upon which "Mulder and Scully Meet the Were-Monster"focused. Having the two styles in the one episode causes them to chafe against each other badly. Throw in some appallingly insensitive material on Islamic terrorism, and you have a pretty jaw-dropping recipe for disaster.

The episode begins with a young Muslim man engaged in prayer. He finishes, drives to pick up his friend, they pray a little together, walk into an art gallery and blow themselves up with suicide vests. That they are suicide bombers is something that can be seen from a mile away. In the aftermath of the explosion we get to see screaming people running out with their whole bodies in fire. It is a deeply garish and tacky display, which combined with the obvious set-up gives the episode a particularly repellent cold open. This sort of obvious sensationalism feels out of place for The X-Files. I honestly think the series deserves much better than this.

Mulder and Scully meet two FBI agents, Miller (Robbie Amell) and Einstein (Lauren Ambrose). Miller is a dark-haired paranormal obsessive, while Einstein (a ridiculous name for the character) is a red-haired doctor and sceptic. It is quite difficult to understand Chris Carter's intention with the characters. They seem a pretty tedious one-note joke: the younger duplicates moving in. By the end of the episode they have had enough non-comedic moments that the genuinely possibility emerges that they might be the future of the series: Duchovny and Anderson move on the other projects, leaving a new series to continue under Amell and Ambrose. Without knowing what their real purpose is here, and with them both being served some pretty risible dialogue, it is a possibility I am loathe to embrace. Given how shaky Chris Carter's writing has become on this series I would honestly rather the whole franchise take a much needed retirement. Right now all it is do is tarnishing its own reputation.

While Scully and Miller attempt to contact the vegetative terrorist using magnetic resonance, Mulder takes magic mushrooms in an attempt to commune with the man on another plane of existence. Mulder's subsequent drug trip is delightful, featuring cameos by the Three Gunmen and the Cigarette-Smoking Man, but it is a pretty ridiculous indulgence. Had Mulder's story ended with him embarrassed and ridiculed, I could perhaps have accepted it. That it turns out he took a placebo from Einstein and had the spiritual experience anyway is simply silly. That he then discovers he did communicate with the terrorist's spirit is flat-out insulting of the audience's intelligence.

A lot of supporting characters in this episode say murderously awful things about Muslims. You could almost think Carter was making a point about American bigotry with this episode had he not also made the subject of this bigotry a demonstrated radicalised terrorist. The whole Muslim angle of the episode feels distasteful and badly misjudged.

This is not a good episode by any reasonable measure. It leaves Season 10 with three good episodes out of five, and a quality ratio of 60%.
Posted by Grant at 7:20 AM