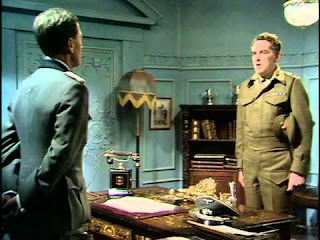 It is 9 November 1972 and time for another episode of Colditz.

Months after arriving at the German prison Colditz, Captain Grant (Edward Hardwicke), Flight Lt Carter (David McCallum) and Lt Player (Christopher Neame) recieve a new commanding officer - only to find he does not want any of the prisoners to attempt an escape.

It took its time in getting here, but Colditz finally arrives at the titular castle. It has been an unexpected strategy to delay this episode with what were effectively three separate prologues, but it is a strategy that works. We begin the episode already well familiar with three of the central characters, and this relieves the pressure on trying to learn too many other characters at once.

For while we are finally at Colditz, the series has not finished introducing its cast. Enter Lt Colonel John Preston (Jack Hedley), the new senior officer of the British prisoners. It is a clever strategy to introduce both Colditz and Preston at the same time, since as he learns of its layout, routine and population we do as well. He is a great character. At first he seems a typical and inflexible stiff-upper-lip type from any number of old British war films, but the episode gradually reveals a depth to him and a purpose to his actions. Hedley plays it brilliantly, since he keeps so much of the emotion and thought process guarded behind a veneer of polite restraint.

Bernard Hepton plays Colditz's Kommandant. It's an odd sort of genial performance, with Hepton playing the man as a genuinely polite and even friendly character. He establishes a rapport with Lt Colonel Preston pretty much immediately. It is interesting that the Kommandant is not a Nazi, but instead a German officer who is simply serving his country as his commission demands that he do. It is the more fascinating choice, and gently pushes against stereotype. I am interested to see if and how this is developed as the series goes on.

It is clear that this episode is operating on a somewhat lower budget. Much of the action is now conducted on sets and shot on videotape rather than film. It does feel a bit of a letdown after the glossier efforts of the first three episodes, but the script quality here (by regular BBC writer A.J. Crisp) and the strong perfomances compensate for that.

For now the characters are established, and they are finally locked up in Colditz. Surely from here it's just a matter of escape.
Posted by Grant at 7:57 AM