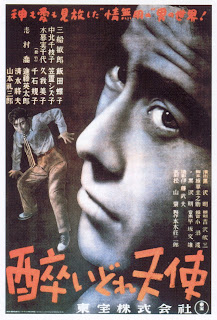 Sanada (Takashi Shimura) is an alcoholic doctor working in a post-war Tokyo suburb. One night a local hoodlum named Matsunaga (Toshiro Mifune) burst into his surgery, having been shot in the hand. While treating his wound, Sanada also diagnoses him with tuberculosis. While Sanada desperately tries to force Matsunaga to rest and recover from his disease, the troubled gangster is too focused on maintaining his position when a rival returns to Tokyo from prison.

Akira Kurosawa's seventh film is a wonderfully atmospheric film noir. It also marks the first collaboration between the director and the actor Toshiro Mifune. A mass walk-out of talent from Toho in 1947 left its directors scrambling to find new talent. A fellow director told Kurosawa about an impressively talented 28 year-old actor, Mifune, and Kurosawa sneaked into an audition session to see him perform. So impressed was he with Mifune that he cast the charismatic, highly physical actor in Drunken Angel, and subsequently cast him in a leading role in another 15 features. Their 16-film collaboration is one of the most exception actor-director partnerships in movie-making history.

Of course this shouldn't overlook Kurosawa's existing regular actor, Takashi Shimura, who managed to collaborate with the director on 21 separate projects - five more than Mifune. On screen Shimura and Mifune make a great team, bouncing off one another and generating great character drama between them. They bring an energy to Drunken Angel that hasn't really been in any of Kurosawa's earlier films, and as a result this really does feel like a new step forwards in the director's style.

Part of this new-found energy likely comes from the genre. The film utilises a growing tension as Matsunaga struggles to maintain his position within the yakuza in the face of growing illness and the return of the more ruthless Okada (a deliberately unsympathetic Reisaburo Yamamoto). It all climaxes in a knife-fight between the two gangsters that is probably the most visually effective and well edited sequence Kurosawa has directed to this point. 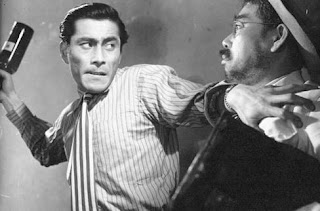 Much of the film's action takes place around a festering pond in the middle of town. It's covered in muck, and suspicious substances are constantly bubbling to the surface. Sanada is constantly warning children away from playing in it. At night, a random loner plays his guitar from underneath a railway bridge while bored sex workers sit around by the pond's edge. It's all a rather subtle indictment of post-war Tokyo: the city half-destroyed by the Americans, and then corrupted by crime and decay. It's subtle because it needs to be - all screenplays for Japanese films were being vetted by the American military - but this sort of critical social commentary is something that's been running through all of Kurosawa's post-war features. As with One Wonderful Sunday Kurosawa showcases an American-style cabaret club - it's fascinating how much Japanese culture is changing over the period in which this film was shot, and how Kurosawa constantly needles at the influence American is having over his country.

There's a really impressive symbolic unity across this film: it's all sickness and decay. People are dying of tuberculosis, both Sanada and Matsunaga are progressively drinking themselves to death, the suburb is becoming overriden with crime, and even the surrounding landscape is sinking into a disease-ridden swamp. There's a weirdly upbeat epilogue to the film - Sanada has successfully cured a teenage girl of tuberculosis, proving that willpower can overcome all obstacles - but it's a hollow ending. Drunken Angel is a dark, miserable, and beautifully constructed film, and a remarkable step forward in style and substance for Kurosawa's direction.