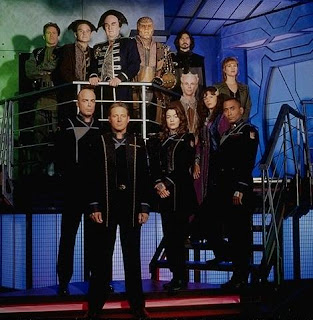 The first time around, back in 1997, Season 4 was where I gave up on Babylon 5. The weirdly truncated conclusion to the Shadow War, not to mention the highly unsatisfactory way in which it actually did climax, pretty much drove me away. It felt like a weird sort of betrayal: I had given over three and a half seasons to series creator and writer J. Michael Straczynski, and he is turn had in effect wasted my time.

Watching the season the second time was a lot easier, since I knew the disappointment was coming and wasn't so blind-sided by it. I also had the added attraction of entirely new episodes to watch after it. I was slightly surprised at how strong many of those later episodes were. I do still think there are serious structural problems with Season 4 - the Shadow War does end in both an abrupt and unsatisfactory manner, the Minbari civil war is oddly truncated, and the Earth civil war feels as if it would have been better suited to being resolved before the Shadow War concluded.

Even with all of that in mind, I think it might now be my favourite season of Babylon 5.

Even on the second viewing the conclusion of the Shadow War was largely pretty weak stuff. Lorien (Wayne Alexander) was a deeply irritating character and too much of the story wound up getting told to the audience through blunt information dumps rather than by action or proper drip-fed dialogue. The highlight of the early episodes was Londo and G'Kar, and the profound manner in which both characters had changed since the beginning of the series.

The Earth civil war dominated the second half of the season, of course, and by contrast to the Shadow War it went remarkably well. Some of the best episodes of Babylon 5 were included in this portion of the season. Again, however, it wasn't faultless: Garibaldi's storylines involving William Edgars really didn't work as well as they should have, and a lot of dramatic potential was lost in abruptly folding Garibaldi back into the main storyline.

Those final few episodes, however, were about as perfect an ending as I've seen in a science fiction drama. Had Season 5 not been commissioned, and the series concluded here, nobody involved would have any cause for worry.

So: the best episodes of the season are probably as follows:
And correspondingly, the worst were probably:
Now we've gone one more season of 22 episodes to go, then a handful of made-for-television movies, and after that I might just be a completist and check out the spin-off series Crusade. No promises.
Posted by Grant at 5:08 PM