Babylon 5: "Between the Darkness and the Light" 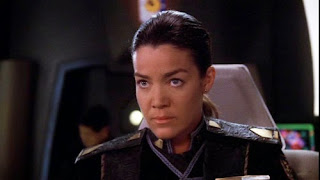 Ivanova (Claudia Christian) continues to lead the united rebel fleet towards Mars and Earth. Back on Babylon 5, Londo Mollari (Peter Jurasik) calls a secret meeting of the council without Delenn's knowledge. On Mars, Garibaldi (Jerry Doyle) is captured by the resistance - who refuse to believe his betrayal of Sheridan was caused by Bester's mind control.

Okay so that last bit of the plot summary is a cheat, since Garibaldi's troubles last all of two minutes before Lyta does a mind scan and confirms his personality was telepathically transformed by the Psi Corps. I'm in two minds about this development, which happens very early in the episode. On the one hand it's entirely logical: Lyta is there, she's an immensely powerful telepath, and if she hadn't immediately scanned him to prove his story we would all be sitting around criticising the episode for not doing the obvious and logical thing. So, in story terms, it's perfectly fair and sensible to wrap up Garibaldi's betrayal storyline in such a sudden manner. In narrative terms, it really sucks.

"The Face of the Enemy" set up a remarkably strong direction for Garibaldi - a man who, through Bester's interference, lost absolutely everything. The episode concluded with him estranged from his colleagues and friends, with his new employer murdered, and with his ex-girlfriend missing. In one scene two thirds of that fertile set-up have been resolved, leaving just the least interesting part - where is Lise Hampton? - left unanswered. So logically I'm satisfied, but emotionally I'm feeling remarkably short-changed.

Garibaldi's subsequent rescue of Sheridan, along with Lyta and Franklin, seems fairly unconvincing: three people essentially walk into a highly secure military base and walk out with the Earth Alliance's most important political prisoner. Like proving Garibaldi's trust, it feels like a short-cut to get the story where it needs to go without actually telling an entertaining story while it does it.

A few brief scenes on Babylon 5 show Londo calling a secret meeting of the Council without Delenn's knowledge or consent. She storms in to find out what political chicanery he is undertaking, only to discover it's a unanimous vote by Centauri, Narn, and the League of Non-Aligned Worlds to support Sheridan's fleet with aid and military cruisers. Both Londo and G'Kar speak to the importance of humans in bringing the galaxy's various civilizations together. It's a tremendously twee scene, but to its credit it's earnest and does feel as if it's been earned by the overall series arc so far. It's the kind of scene you'd expect to see at the very end of a series - another sign that the production team were hurriedly trying to wrap things up in case they didn't get a fifth year.

While everything else is going on, Ivanova continues to lead the fleet from the bridge of White Star One. I think this is about the best material Claudia Christian ever received in this series: she gets one hell of an angry monologue when she enters into battle, and a perfectly pitched romantic moment with Marcus (Jason Carter) as well. It's perfectly pitched because they immediately follow it up with her being critically injured as debris smashes into the front of the ship. The episode ends with her being given a few days to live, but it seems difficult to believe that she's going to die at the end of all of this. We'll see it an episode or two.

Ultimately I do feel it's worth giving this episode a tick of approval, because it is generally very entertaining. It's mildly frustrating at the same time, since it feels less like a proper dramatic episode and more like a narrative shortcut to get from Sheridan in captivity to Sheridan back in command of the Agamemnon, flying into a final battle with the Earth Alliance. It's a case of 'good, but we all know you could do better.'

We're 19 episodes into the season, with three episodes to go. 13 episodes have been good, giving Season 4 a current quality ratio of 68 per cent.
Posted by Grant at 10:05 PM