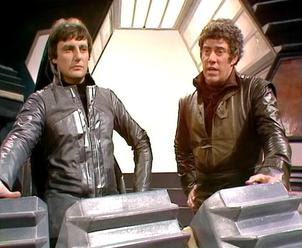 Here's a hell of a line for a character: 'As far as I am concerned you can destroy whatever you like. You can stir up a thousand revolutions, you can wade in blood up to your armpits. Oh, and you can lead the rabble to victory, whatever that might mean. Just so long as there is an end to it. When Star One is gone it is finished, Blake. And I want it finished. I want it over and done with. I want to be free.'

Blake (Gareth Thomas) finally reaches Star One, the Federation's top secret control centre, with a plan to destroy it and throw the whole of human civilization into chaos. The problem is that Star One is already going horribly wrong. Climate control is failing on dozens of worlds. Orbital traffic control is throwing starships into each other's flight paths. Communications are disrupted across the galaxy. As Supreme Commander Servalan (Jacqueline Pearce) leads a coup d'etat of the Federation, Blake finds himself fending off an alien invasion alongside one final confrontation with Space Commander Travis (Brian Croucher).

"Star One" is, within the fairly tight limits of the Blake's 7 production budget, just about the perfect season finale. It ties up long-running story arcs from both Season 2 and the whole series to date, it progresses the characters into a new dynamic, and it ends on the mother of all cliffhangers. While it's let down on the edges by some very cheap model work and one or two weak performances, it's nonetheless the best episode of the series so far.

The episode's opening scenes are more concerned with the Federation than with Blake's mission. Computer-controlled networks across the Federation are going haywire, and Servalan appears to be the only person on top of what's going on. She's the one who identifies the problem as being with Star One, and when the President and the Federation Council attempt to hold meetings to talk through the crisis she simply has them arrested and shoved out of the way. It's a great episode for Jacqueline Pearce: she hasn't had scenes of blunt authority like this since she was introduced, and she never gets them again. What's particularly striking is the manner in which Servalan assumes control of the Federation. There's no super-villain gloating going on, or gleeful hand-rubbing: she simply sees the opportunity and takes it for the good of everyone. It's only when an aide addresses her as Madame President that she can afford a moment of clarity and a satisfied smile.

Star One is, of course, failing because it has been infiltrated by aliens from the Andromeda galaxy. This crisis is well developed throughout the episode. First Avon notes that Star One is the closest point on the rim of the Milky Way to Andromeda. Secondly a vast network of anti-matter mines are discovered running the entire galactic rim. Then it becomes clear that shapeshifting aliens have replaced most of the Star One crew, and plan to deactivate the mine field. It's quite late in the piece that the alien fleet actually arrives. Introducing such a massive alien menace in the space of one episode is a fairly tough sell for an audience, but by breaking it down into incremental developments Chris Boucher manages to pull it off.

The invasion attempt is great dramatic material for Blake as well. He begins the episode as an obsessed zealot, willing to destroy Star One and potentially kill millions of people as the Federation's systems collapse. Once the imminent invasion becomes clear he realises - almost too late - that after so much effort and loss trying to find Star One, he now has to make sure it stands. This is Gareth Thomas' final regular episode as Blake - he declined to return for a third season - so "Star One" in effect wraps up his character arc nicely.

The same can't be said for Jenna. Sally Knyvette also declined to sign up for a third year, but in her case the script once again leaves the character on the Liberator while the action goes on down on the surface. Knyvette looks decidedly bored - in one critical scene she's visibly reading her lines from cue cards - but given how poorly she's been written for much of the season I hardly blame her.

It's also the final episode for Space Commander Travis, who by this stage has gone so unhinged that he's collaborating with the aliens to destroy the human race. It's a bit of a jump, logically speaking, but it does afford Brian Croucher the best material he's had all season. What's most interesting is that in the final confrontation it's not Blake who kills him but Avon, shooting him twice and sending his injured body screaming all the way down inside a power reactor.

I'm not sure if it was intentional or not, but it feels like a passing of the torch: Blake is badly wounded, and so Avon steps in and not only kills Travis but commands the Liberator in defence of Star One. It's a great episode for Blake and Avon: it begins with them practically at each other's throats, and ends with Blake admitting 'for what it's worth, I have always trusted you', and Avon correspondingly obeying Blake's wishes and defending Star One until the Federation fleet arrives.

The episode boasts great character work, some sparkling witty dialogue - mainly from Avon - and some very strong lead performances, but what really impresses me is just how epic the production team have managed to make it feel. It's important to realise just how tight the Blake's 7 budget was: it replaced a police drama in the schedules, and correspondingly received a police drama's modest budget. They were making this series for much less than Doctor Who was being made for, and Doctor Who was hardly being well-funded by the BBC. This is a small-scale, beautifully constructed episode that creates the illusion of a vast tapestry. The entire overthrow of the Federation government happens from one set. The galaxy is placed in peril from three more. Sure the model work is pretty awful, but all things considered the episode is a remarkable achievement.

It all ends on a great cliffhanger too. The Liberator opening fire on the lead Andromedan ship, the Federation hours away from reaching them, Blake injured, Servalan in control of the Federation and the Federation itself set to be annihilated. Who knows what's going to happen next? After 13 episodes, Season 2 concludes with eight good episodes and a final quality ratio of 62 per cent. That's coincidentally the same score I gave Season 1.
Posted by Grant at 8:35 PM