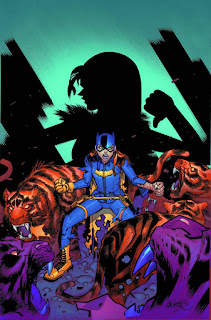 Batgirl #43 continues the relatively adorable new direction for Barbara Gordon. She's a much more upbeat character in recent months than she has been in years, and she's surrounded by a likeable supporting cast of twentysomethings and college students. This issue feels remarkable lightweight and fresh - in a really enjoyable way - as Batgirl investigates a series of tiger attacks in Gotham's information technology sector.

One of the things that really helps this book - and I'm pretty sure I've mentioned it before - is the relatively high panel count. It gives the stories a lot more room to tell a story, and as a result each individual issue feels much more satisfying than the average DC/Marvel comic. Babs Tarr's artwork is perfectly suited to this kind of dense layout as well, since she draws relatively sparsely with a bold cartoony aesthetic.

DC recently tried relaunching its main line with what was being internally referred to as 'Batgirling'. Taking this comic as the model, creators were encouraged to think outside the box and think of fresh setting and angles for their characters. I think they have completely tried to learn the wrong lesson. Batgirl is working because it's telling tightly constructed, upbeat and enjoyable superhero stories with clear, appealing artwork and likeable characters. That is it's achievement: not a hipster-style costume and a change of setting. (4/5)

Under the cut: reviews of Aquaman, Doctor Who and Justice League 3001.

This is one of those issues with a plot development that makes you re-assess the last two issues before it in a new light, and forgive a few of their weaknesses - they now turn out to be part of a plot twist. That in mind I'm still not entirely happy with this relaunched Aquaman - the biggest problem is McCarthy and Merino's artwork, which feels very muddy and undefined, and a really poor match for the more fantasy-oriented super-heroics that crop up in this title. The art is, to an extent, hurting the book. (2/5)

The 10th, 11th and 12th Doctors have accidentally brought about the exact event that's going to destroy the universe. Now they're scrambling through a maze in an alien desert, accidentally triggering leftover Time War weapons, and getting an unwanted glimpse into their own future. This third issue lacks the spark of the first two. It also ends on a cliffhanger that simply didn't grab me in the manner I suspect Cornell wanted it to. This is still a fun, fast-paced event comic for Doctor Who fans, but while the first two issues ranked a four this one really does only rank a three. Hopefully it will pick up against next week. (3/5)

The League's fight against the 31st century Starro the Conquerer ends not with a bang but with bureaucracy. Guy continues to struggle with her new female identity. Lois Lane keeps planning the League's destruction - but is she stalling for some reason? Much as I've enjoyed Giffen and DeMatteis' silly dialogue and character comedy, the real star of the book continues to be Howard Porter. The new style he developed for the comic has been it's greatest strength. It's richly detailed, imaginative and appealing. (3/5)
Posted by Grant at 7:53 AM