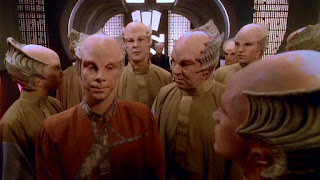 Sheridan uses subterfuge and trickery to persuade the League of Non-Aligned Worlds to back his White Star fleet. At the same time Delenn meets with her old enemy Neroon in a last-ditch attempt to halt the Minbari civil war.

Two storylines run in parallel. One focuses on Sheridan, the other on Delenn. One of them is pretty great television. The other is thunderously stupid, not only failing to convince on its own merits but also potentially damaging the series' overall narrative. Without knowing fully what happens next, it's difficult to say. Whatever the outcome, this is a weirdly divided episode.

Let's have a look at the half I think works, which is Delenn's negotiations with Neroon (John Vickery). Not only do we get some nice scenes of the two of them in conversation - old enemies realising they need to cooperate in order to prevent their respective castes from going to war - we also get to see the growing paranoia within Delenn's own religious caste. In the end it's only Lennier who prevents them from destroying their own ship killing both Delenn and Neroon in the process - and in true Lennier fashion he elects not to tell Delenn of what almost occurred. It's convenient that the Minbari, who pride themselves on never lying, don't seem to regard the omission of truth or subtle misdirection as a lie.

It's a good episode for Lennier, with Bill Mumy giving a great performance. Likewise Mira Furlan does well with her scenes, and John Vickery is delightful as the plummy, aristocratic Neroon.

Best of all it all appears to be a ruse. The episode ends with Neroon absconding in the middle of the night, to inform his superior that he's managed to learn all of the religious castes plans in preparation for a victory over them. It's wonderfully dark stuff, and a nicely ominous note on which to end things.

Then there's the storyline of Sheridan's attempts to get the White Star fleet patrolling all of the borders of the galaxy's various civilizations. He can't do it directly - the non-aligned worlds will never assent to what's seen as a provocative military overture. Instead he relies on subterfuge, deceiving the world's ambassadors into thinking there's some great invisible threat that Sheridan won't tell them about, and thus they fall over themselves to grant him access to their borders. It's all played for laughs, with the various ambassadors depicted as a credulous and hysterical rabble. It's also morally corrupt, and flies entirely in the face of the bold, noble identity that the series has created for Sheridan. Ivanova even comes as close as is possible to pointing this out, when he orders her to plant a fake news story into their apparently factual 'Voice of the Resistance' broadcast.

Now it's a serialised narrative, so there's every chance this deception will come to haunt Sheridan in future episodes. The humorous manner in which it is achieved, however, makes me suspicious that it won't be. In the context of the series as a whole it's too early to judge this storyline. On its own self-contained merits, it's terrible.

It makes for a very strange episode as well, because we have two storylines in parallel, both of which feature a character deceiving others to get what he wants, and in one storyline we are supposed to despise the betrayal and in the other we're supposed to laugh with it.

This is one of those 'on the fence' episodes of Babylon 5, where half of the episode is good and the other half is bad. In this case, the poorer elements of the episode outweigh the better ones. I really had a problem with what Sheridan did here.

We're 13 episodes into the season. Eight episodes so far have been good: the quality ratio slips back to 62 per cent.
Posted by Grant at 7:22 PM