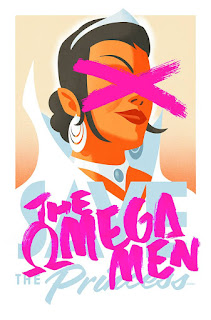 Of the 20-odd new titles launched by DC Comics in June, I think my favourite has been The Omega Men. It's partly Barnaby Bagenda's artwork, which bypasses inks and follows a generally quite rigorous nine-panel structure on each page. That's then enhanced by Romulo Fajardo's nice, subtle colours.

Tom King is telling an intriguing story, in which a group of renegades appear to be launching a terrorist attack on an alien empire. They've already kidnapped and faked the death of former Green Lantern Kyle Rayner. Here they launch a kidnapping attempt on a princess named Kallista, with unexpected results. One of the strengths of this series is the lack of an explanation. Each of the first three issues has loaded intrigue on top of intrigue, to the point where it's all set up for an outstanding revelation. Of course that also adds another layer of pressure: the more the mystery is developed, the more critical it is that it adds up to a thrilling explanation.

It's nice to see DC publishing something that looks great, has a great sci-fi setting, and gives another outing for the vastly underrated Kyle Rayner. Sales of the first issue were a bit on the low side - I really hope a solid, regular audience finds this book and gives it the longevity it deserves. (4/5)

Under the cut: reviews of Detective Comics, Ms Marvel and The Wicked + the Divine.

The GCPD continue to work with their own Batman while working to stop two rival criminal plots, and deal with a corrupt cop in their midst. I am really enjoying Buccellato's current angle on the Jim Gordon Batman - while Batman itself focuses on Gordon himself, Detective Comics is taking one step back to focus on the police officers instead. The focus in particular falls on Harvey Bullock and Renee Montoya, who make for a great pair of leads. I enjoyed this issue a lot more than the last, and I actually think part of that is the lack of the robot Batsuit in this issue. It's a weird design, and to be completely honest I don't think many artists are capable of making it look too good. (3/5)

The world is ending, New York probably only has a few hours left, and Ms Marvel is spending it on her first-ever team up with Carol Danvers - the former Ms Marvel now Captain Marvel. I think this comic is at its best when it plays with Kamala Khan's unbridled enthusiasm for superheroes and attempting to be one herself. I think my favourite thing in this comic thus far was her fangirl-esque team-up with Wolverine, and to be honest her team-up here with Carol is just about as good. My only criticism is that it's tying into Secret Wars at all: the sooner that mega-crossover winds up and stops getting in the way of all the regular storylines, the better. (4/5)

This issue, featuring guest artwork by Tula Lotay, is a neat little short story that fits nicely into the ongoing storyline. It feels like the best kind of fantasy story: one with something to actually say beyond telling an entertaining story. There's a two-page spread towards the end of this issue, which focuses on one particular member of the Pantheon, that hits like a punch to the guts. It's very bold, arresting storyline. That's in isolation - in terms of the ongoing narrative I do feel like The Wicked + the Divine has slipped a little. The first arc was sensational, the second was really good, this third lacks an overall energy that I'm really missing. (4/5)
Posted by Grant at 10:00 PM