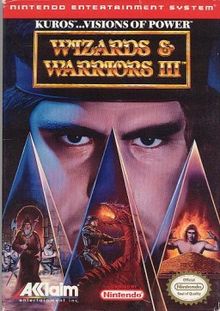 Wizards & Warriors was a fantasy platforming franchise, originally developed by Rare in 1987 for the NES. It was a sufficient hit to warrant a 1989 sequel, Ironsword, which was developed on Rare's behalf by Zippo Games. That game led to a third and final game, Wizards & Warriors III: Kuros: Visions of Power, which was released in 1992 in the USA and 1993 in the UK. As is often the case, I think the final iteration of the franchise was its best: videogames often benefit from constant improvements in coding and technology, and the ability to see how previous games went with players and adjust accordingly.

In the game players control the amnesiac knight Malkil, who has woken up in an unfamiliar city without his armour or memory. This handy tactic, similar to one used in Metroid sequels (Metroid's sprawling non-linear game maps are a clear influence here), allows the player to slowly level up without questioning why their character isn't as powerful as they were when they finished off the last game in the series. 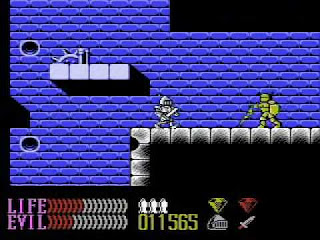 There are three main areas to explore: the town, the caverns beneath it, and the palace above. You power-up across three simultaneous careers: as a knight, a thief, and a wizard. Progress along each career grants access to new powers and additional areas of the game. Beyond that, it's a satisfying combination of jumping, ducking, and hitting things with swords.

The graphics are distinctive and colourful, with large, bold characters and pretty crisp collision detection (always a make-or-break issue for platformers). Certainly there's more platforming than fighting in the game, but the sense of exploration really helps that become a satisfying experience.

The game's music is one drawback: essentially one warbling tune, it rattles on behind the action interminably like one of the world's worst ear-worms.

Wizards & Warriors III ends with a nonsensical coda: a UFO floats down, beams Malkil up and transports him to the far future. It was intended to set the stage for a fourth title, Lasersword, but the closure of Zippo Games and the failure of this game to sell very well put paid to those plans. To date a fourth game has not eventuated, and the franchise lies fallow.
Posted by Grant at 5:12 PM