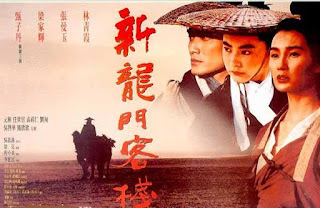 King Hu's 1966 wuxia film Dragon Inn was a ground-breaking and hugely popular film, so it's not surprising that eventually somebody had the idea of remaking it. The task fell to the hugely successful Hong Kong film producer Tsui Hark. While Tsui was an accomplished director in his own, he handed directorial duties to Raymond Lee (The Last Conflict). Lee and Tsui assembled an all-star cast for the remake, including Brigitte Lin, Tony Leung Ka-fai, Maggie Cheung and Donnie Yen. The resulting production, New Dragon Gate Inn, was a massive commercial hit and remains a popular cult film today.

The storyline is essentially the same as the original film. Tsao Siu-yan (Donnie Yen) is a powerful eunuch in control of China's Eastern Depot security agency. He has a rival general killed, and uses the general's children as bait to lure in the general's allies. Those allies successfully rescue the children, but are forced to take shelter at the isolated Dragon Gate Inn before they can escape across the border, When the Eastern Depot forces arrive, a complicated game of deception begins between the two forces.

Dragon Inn was an excellent example of late 1960s wuxia cinema, representing all of the style and tone that the genre tended to express at the time. It's fascinating to see that New Dragon Gate Inn achieves much of the same effect, only 26 years later and reflecting the typical style of early 1990s wuxia instead. The characters are mostly the same. The storyline is, in broad terms, intact. The action is much more frequent and its choreography more elaborate. The plot is more complex. The film is also much more humorous, in a fairly dark sort of a way.

Brigitte Lin plays Yao Mo-yan, a master swordswoman with an unrequited love for her fighting companion Chow Wai-on (Tony Leung Ka-fai). They arrive at the Dragon Gate Inn to protect the two children. Lin is a phenomenal performer who I have liked immensely in a number of Hong Kong films, including Peking Opera Blues, The Bride with White Hair and Ashes of Time. She sadly retired in 1994. She is excellent here, giving Mo-yan a depth and a melancholy air that lifts the character quite far beyond what she's given in the screenplay. Hers is the most interesting performance in the film, since Tony Leung simply doesa charismatic job of playing a heroic warrior, and Donnie Yen effectively only appears during the climax.

Maggie Cheung plays a new character: Jade, the bawdy, untrustworthy owner of the inn, whose staff are all criminals, and who is playing both the rebels and the Eastern Depot off one another. Her criminal operations give the film quite a horrific edge: anyone killed at the inn is quickly dropped down into the cellars, where a skilled cook strips the flesh from the bones in seconds before cooking it into the inn's celebrated dumplings. Cheung has good comic timing, making Jade a broadly played but highly entertaining addition.

At about the 80 minute mark the various deceptions, gambits and lies all collapse, and the film explodes into action for the remainder of its running time. It is brilliantly staged combat, performed at sometimes astonishing speeds and with excellent use of wire-work, sword-fighting and kung fu. The film's climax is an odd one. It begins as a three-versus-one sword fight in a sandstorm, which is incredibly well shot and edited, but suddenly takes a right turn into also slapstick-style antics that threaten to derail the whole scene. It doesn't ruin the film, but it does cause a worrying wobble in quality at precisely the worst possible moment.

New Dragon Gate Inn lacks the dignity and poise of its inspiration, but it does stand up extremely well as a classic example of its genre and of the year in which it was made. It was also popular enough that 19 years later Dragon Inn was remade again, this time as Flying Swords of Dragon Gate with Jet Li in the leading role.
Posted by Grant at 9:27 AM