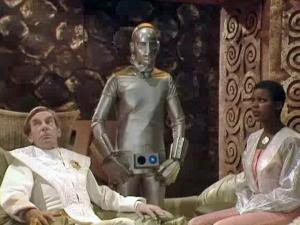 Tarrant (Steven Pacey) and Dayna (Josette Simon) teleport down to the planet Obsidian, where a former colleague of Dayna's father now rules over a peaceful independent civilization. Tarrant and Dayna are not alone, however: President Servalan (Jacqueline Pearce) has also travelled to Obsidian with a fresh plan to capture the Liberator.

So we're three for three so far this season for plots involving Servalan randomly turning up to make trouble for Avon and his crew. For the President of a galaxy-wide Federation she really does seem to spend a lot of her time chasing down the Liberator and trying - and failing - to capture or kill its crew. It's a shame: she was such a powerful character in the earlier seasons, whereas now she's a rather predictable and boring villain.

It's not just Servalan who's back either: Allan Prior returns as the least effective of Blake's 7's writers, and his odd, weakly plotted and rather dull adventure this time around is pretty much par for the course. The dullest part is really it's setting and guest characters: the people of Obsidian are dedicated pacifists, with a dogma pushed to such extremes that they simply don't make sense any more. Their leader Hower is played by Michael Gough (Alfred from the 1990s Batman movies) with a lovely presence and speaking voice, but there isn't really a character behind it. They're also weirdly inconsistent: Hower speaks extensively of non-violence, and then murders someone by the episode's end. The hypocrisy goes unnoticed by the other characters.

The rest of the episode focuses on Servalan's attempts to capture the Liberator, including another fairly tedious space battle and the second takeover of the ship by Federation soldiers in as many episodes. The Federation commanders seem particularly shabby this week. It doesn't look like they shave any more. Or brush their hair. Even Servalan seems oddly dressed down compared to her usual gowns. The entire Federation storyline feels repetitive: we're into the third year of the series, and strategic manoeuvres to capture the Liberator aren't in themselves very interesting any more.

It is oddly nice to see both Avon and Tarrant get shot and injured over the course of the episode. They all get shot at so often it's a wonder they don't get injured more often. Of course Avon's weird rectangular arm cast has to be a contender for the most unconvincing prop in the series so far.

"Volcano" is low on plot, weakly motivated and ultimately very, very dull. It's the first big disappointment of the season, dragging the quality ratio down to 67 per cent.
Posted by Grant at 7:36 AM