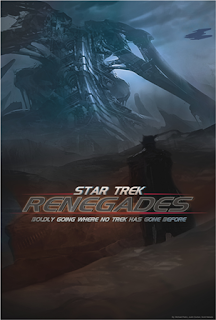 I am honestly not sure what to make of this. Fan films have been a part of science fiction fan culture for decades. In recent years Star Trek in particular has benefited from a growing variety of fan-made episodes, produced with extraordinary amounts of enthusiasm and typically excessive attention to detail. As they increased in popularity and profile, they started to attract the participation of writers and actors from the actual television franchise: a guest appearance by George Takei here, an unused Next Generation script by David Gerrold there.

Star Trek: Renegades feels as if this phenomenon is crossing a bridge. Exactly where this bridge leads I have no idea. This isn't a fan production in the conventional sense. Its script was written by Ethan Calk, who has previously written two episodes of Star Trek: Deep Space Nine. It is directed by Tim Russ, who also reprises his role of Tuvok from Star Trek: Voyager. The cast includes Walter Koenig as an improbably old Admiral Pavel Chekov, as well as a cameo by Robert Picardo as EMH creator Lewis Zimmerman. Even outside of nostalgic characters the cast includes professional actors like Sean Young (Blade Runner), Edward Furlong (Terminator 2), Adrienne Wilkinson (Xena: Warrior Princess) and Gary Graham (Enterprise, Alien Nation). Crowd-funding led to the film being produced for US$375,000.

This is absolutely not a fan film - yet the road from early home-made video productions to this semi-professional series pilot is about as clear a path as you can see.

Tim Russ and producer Sky Conway made no secret when they launched this project that they planned to show it to CBS and pitch Renegades as an actual television series. That seemed unlikely at the time, and it turns out that complicated rights issues between CBS and Paramount Pictures means a Star Trek TV series is a couple of years away whether the network wanted Renegades at all. To be honest, it's hard to imagine they would. This 90-minute film is scrappy as all hell, with a storyline that demands a couple of million. It's also almost wilfully uncommercial, combining the sort of simple narrative one would expect on a mid-1990s cable TV drama with the sort of piled-on continuity references that make the whole project creak under their weight.

Renegades follows Captain Lexxa Singh, apparently some sort of clone of the notorious Khan Noonien Singh. Lexxa commands a starship with a crew that includes a Bajoran, a Cardassian, a Breen, a former Borg drone (Manu Intiraymi playing Icheb, a half-forgotten guest character from Voyager), a Betazoid, an Andorian... you get the picture. They're all rogue space pirates roped into a secret mission by Tuvok (Tim Russ) - now the head of Starfleet's intelligence service Section 31 - and the 140 year-old Admiral Chekov (Walter Koenig). Their mission sends them to a desolate planet to assassinate an alien criminal, and reveals an alien infiltration to the highest echelons of Starfleet.

If all of that caused you to doze off, this probably isn't the production for you. To be honest, unless you're a die-hard Star Trek enthusiast willing to watch anything with a phaser or a Klingon this probably isn't for you either. It's cheap, which would be forgivable if the script was imaginative and clever and the acting of a high calibre. Neither is the case. The script is cliche piled upon cliche, while the acting varies from the solid (Wilkinson) to the shaky (Intiraymi) to the visibly bored (Young). I suspect time was an issue. If nothing else, most of the performances here feel rushed by the low production budget.

It's not all awful. Despite the silly Khan tie-in, Lexxa Singh seems an appealing sort of a lead, and Adrienne Wilkinson does play her really well. The idea of basically making Firefly or Blake's 7 inside the Star Trek universe is a really good one. Whoever designed and animated the CGI starships and space battles clearly had a field day. There are even a few genuinely strong moments directed by Tim Russ.

What interests me most about Renegades is not what it is but what it potentially represents. Netflix and Amazon have gone a long way in breaking serialised drama out from the constraints of broadcast and cable television. This suggests one move further: Renegades got made because fans of the franchise collectively dug into their pockets and pre-purchased the thing via crowd-sourcing. Imagine if you could pull this off with an original project that didn't need CBS or Paramount's approval to go any further. Imagine a science fiction or fantasy series that went straight from its producers to its fans: no network executives, no studio interference, just pure entertaining speculative fiction dictated upon its own terms.

Star Trek: Renegades isn't very good, but something like this, with better scripts and stronger performances? That would really get my attention.
Posted by Grant at 7:38 AM