Doctor Who: "The Unwilling Warriors" 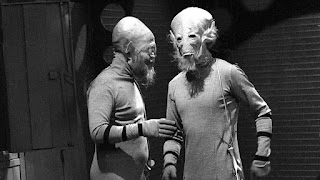 The Doctor and his companions remain trapped onboard a human space rocket. The TARDIS lock has been stolen by the mysterious Sensorites - who continue to terrorise the frightened human crew.

This is the second episode of "The Sensorites", written by Peter R. Newman and directed by Mervyn Pinfield. The first ended with a wonderfully effective cliffhanger, with the Doctor and Ian staring face to face with one of the Sensorites - which floated ominously in space on the otherside of a rocket porthole. This episode we meet a pair of them, which is effective in some ways and disappointing in others. In some moments they're creepy and effective. In others they're rather unengaging and more than a little pathetic. It creates a slightly shaky episode.

There's a wonderful moment where Ian and Barbara go looking for the Sensorites in the back end of the rocket. When they encounter them, in turns into a tense retreat through the ship, slowly backing away room by room as the two Sensorites advance. It's one of the most unsettling scenes in the series so far.

Once the Sensorites start talking to the Doctor and his friends they become much less threatening and actually a little bit silly. They're short, timid - they flinch at the slightest threat or raised voice - and they stand on each other's saucer-shaped feet. By episode's end their purpose is revealed: their planet is rich in molybdenum, and a previous Earth mission brought great misery to their world. As a result they refuse to let the current mission go home in case they bring back even more humans. After all of the tension of the first episode and a half, a rational explanation feels a little anti-climactic.

They communicate to a large degree via telepathy with Susan. It's nice to see the character get used for something other than screaming or being put in peril, and Carole Ann Ford rises to the challenge nicely. She volunteers to put herself in harm's way and accompany the Sensorites down to their planet as a show of trust. I'd say she took after her grandfather, but to be honest at this stage in the series the Doctor's still rather self-focused and prone to running away. I guess it could be argued that it's the Doctor who, in the end, takes after her.

The episode's biggest let-down is some rather silly science, particularly a nonsensical explanation by the Doctor that the Sensorites' eyes dilate in bright light and contract in darkness. It's the sort of weird bit of wrongheaded and unnecessary dialogue that can put a dent into the whole affair.

All things considered, this is a better episode than its predecessor. It leaves the first series with 23 good episodes out of 32 thus far, and a quality ratio of 72 per cent.
Posted by Grant at 10:32 AM