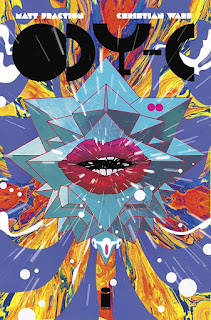 It's great to have Matt Fraction and Christian Ward's ODY-C back after a brief hiatus, during which the first collected edition was released. It's one of my absolute favourite comics for 2015: smart, imaginative, beautifully designed and illustrated, and quite unlike any other book on the market.

It's a gender-swapped science fiction retelling of The Odyssey, and that was a concept that allowed it to run brilliantly for its first five issues. For the sixth, Matt Fraction begins to weave in other elements as well including the Hercules myth and The Thousand and One Nights, and in the book's back matter he's promising Moby Dick as well. He's basically taking old stories, remixing them and making them new again.

While the source material has expanded, the free verse narration remains. I imagine some readers might find this comic a maddening read, told as it is in a semi-detached lyrical fashion, but I'm finding it wonderfully addictive. Of course it wouldn't be half as successful without Christian Ward's beautiful, grotesque designs and artwork. There's a creepy sexual vibe to everything in ODY-C, all developed with suggestive curves and rich colours. The panel layouts are stunning.

So: not for everyone, but for the audience looking for a challenging and beautiful science fiction comic, it's a must-read. (5/5)

Under the cut: reviews of Action Comics, Catwoman and Lando.

I'm really enjoying this current storyline, in which a de-powered Superman has had his secret identity exposed to the world, and now has to put up with anti-alien prejudice while tracking down a group of mysterious shape-shifting shadow people looking to make his life a living hell. The character work here by Greg Pak is top-notch: I really like the way he writes Superman in particular, but he's also continuing to do a great job of expanding and enhancing the supporting cast. Aaron Kuder's artwork also appeals, and seems to be getting better and better as this run goes on. (4/5)

Selina Kyle continues to wrestle with Gotham's various crime families, while continuing her hunt for Batman's whereabouts. Over the past eight or nine issues Genevieve Valentine has expanded this book's cast into a fully-fledged crime saga quite unlike any of the other DCU titles. This issue features numerous brief appearances by popular characters including the Penguin, Spoiler, Bruce Wayne, and Jim Gordon's Batman. David Messina's artwork grounds it all nicely - too often Selina is drawn in an overtly sexualised, seedy manner for a male gaze. It's so refreshing to see her treated with respect. This is pretty much as good as a Catwoman comic has been in more than a decade. (4/5)

Lando Calrissian and his sidekick Lobot have accepted a contract to steal a space yacht from an Imperial shipyard. That theft went off without a hitch - until three Star Destroyers turn up to retrieve the Emperor's stolen property. This is a fast, wonderfully enjoyable Star Wars adventure highlighting one of the franchise's most under-used characters. It's also not afraid to introduce characters of its own as well, which helps expand the story beyond simply being a piece of indulgent spin-offery. Alex Maleev's artwork is quite dark and atmospheric, perhaps a little too much for the sort of story Soule is writing, but it's still wonderfully done. (4/5)
Posted by Grant at 5:02 PM