Babylon 5: "The Exercise of Vital Powers" 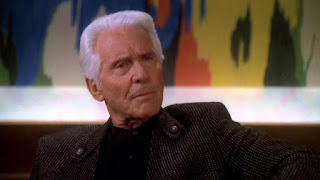 Dr Franklin (Richard Biggs) continues his attempts to revive the human telepaths, who have been in cryogenic suspension since their rescue from the Shadows. When Lyta Alexander (Patricia Tallman) visits the medlab, a fortunate accident reveals that she may hold the key to healing them. Meanwhile Garibaldi (Jerry Doyle) arrives on Mars for a face-to-face meeting with his elusive employer William Edgars.

This is, all things considered, a pretty dull episode. It's not an overtly bad one. It doesn't have any serious missteps in plotting, or weakly contrived attempts at comic relief. It does push two storylines forward, and in both cases the storylines will probably hit quite interesting beats down the line. On its own merits, however, it's simply pretty boring stuff.

Garibaldi meets William Edgars, the Mars-based billionaire who has been paying his bills back on Babylon 5. The role is played by Efrem Zimbalist Jr, probably best known to SF audiences as the voice of Alfred in Batman: The Animated Series. The scenes with Edgars are strange, with a weird sort of Dallas/Dynasty vibe. For me they jar very slightly against the series: Edgars feels as if the character's walked straight out of the 1980s and into a show too contemporary for him to fit. I think it's partly the acting style and partly the dialogue, but to an extent I also think it's his moustache and hair.

The scenes aren't helped by the problem that on the one hand Edgars won't tell Garibaldi - and therefore the audience - what he secret plan is, but on the other it's patently obvious he's cultivating a virus to kill of all of Earth's telepaths. Mysteries only work if they're not sign-posted to the audience in advance. The scenes also aren't helped by the Garibaldi-Edgars-Lise love triangle, which feels exactly like the weak sort of cliché that it is. Jerry Doyle does his best throughout, but he's working with too poor a script to make a difference.

Scenes back on Babylon 5 are better, but lack any real resolution. It's nice to see Franklin and Lyta get paired up, since they're both under-utilised characters and I don't recall seeing them working together in a storyline before. I've been quite hard on Richard Biggs' acting skills in previous reviews, but I have to admit he's rock-solid here. Patricia Tallman has been warming on me the more episodes I've seen her in, and she's very good here. The main problem is that despite some achievement in waking the telepaths up, we still don't know what Sheridan wants them woken up for. By episode's end both Franklin and Lyta know, and are suitably horrified, but we the audience do not. I'm all in favour of delaying revelations until later, but in this specific case I don't feel that I learned enough new information to make the episode worthwhile.

By the episode's end both Franklin and Lyta are on their way to Mars, while Garibaldi has reluctantly agreed to help lure Sheridan into a trap - he thinks for Sheridan's safety, everybody watching knows otherwise. The episode ends in a good, dramatic place, but it's a pity it wasn't interesting enough on the way there.