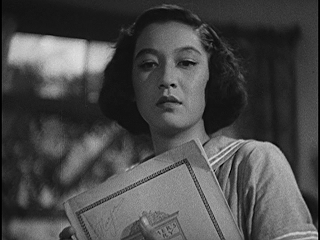 Akira Kurosawa's fifth film, No Regrets for Our Youth, was his first to be made following the end of the Pacific War. With Japan's military government completely disbanded, and a new wave of democracy flowing over the embattled country, Kurosawa was freed to follow his own story ideas for the very first time. No longer required to direct propaganda pictures, or express a government-approved nationalistic agenda, Kurosawa immediately rushed in the opposite direction. No Regrets is an actively political and unexpectedly left-wing polemic inspired by the Kyoto University incident of 1933. It is also a remarkable character study into a young woman's difficult life over a turbulent 13 years of Japanese history.

The Kyoto University incident in a nutshell: in the 1930s Japan was governed by an increasingly nationalistic and militarily controlled government. Within this growing environment of right-wing propaganda and military expansionism, law professor Takigawa Yukitoki delivered lectures on the need for the judiciary to better understand the social roots of political agitators before condemning and sentencing them in trials. In May 1933 the national education minister announced that Professor Takigawa was suspended from teaching due to his advocating Marxist philosophy. The remaining faculty at Kyoto University resigned in protest, students boycotted classes, and protests were organised. The government responded by firing Takigawa from his post, and cracking down on the protests. Careers were destroyed. Lives were ruined.

Rather than adapt the true story of the Kyoto University incident directly, Kurosawa uses it as inspiration for a similar but fictional university uprising. So in Takigawa's place we find Kyoto Imperial University lecturer Yagihara (Denjiro Okochi). While his dismissal forms the catalyst for the plot, that narrative focuses not on Yagihara but on two of his students - Noge (Susumu Fujita) and Itokawa (Akitake Kono) - and his daughter Yukie (Setsuko Hara).

It's this focus on character rather than blunt ideology that makes No Regrets so worthwhile. It's also remarkably refreshing to see a film focus so closely on a female protagonist, and to give that protagonist so much power and agency as the film progresses. Yukie develops and matures as the film goes on, so that the self-assured woman by the film's conclusion is very different to the hopeful young student we see at the film's beginning. Setsuko Hara delivers a stunning performance as well. From here she embarked on a long career working with Mikio Naruse and Yasujiro Ozu, and became one of the most iconic and popular Japanese actresses of the 1950s.

Yukie has two romantic suitors: the straight-laced and subservient Itokawa, and the restless political agitator Noge (Susumu Fujita). This is Fujita's fourth Kurosawa production out of five; film enthusiasts have observed for years the long-running working relationship between Kurosawa and actor Toshiro Mifune. I think the one between Fujita and Kurosawa is just as important, and of course it pre-dates the director's collaborations with Mifune as well. This is Fujita's strongest performance to date, and markedly different to the way he played Sanshiro Sugata.

The second half of the film is better than the first. Once the political situation in Japan grows worse, and the stakes rise for Yukie and Noge, Kurosawa manages to draw a lot more drama and suspense onto the screen. He also keeps a masterful control over the film's pace. There's a wonderfully prolonged moment about 50 minutes in, where Kurosawa stretches an awkward romantic pause for much longer than you would think was possible.

The film's final half hour, which sees Yukie working on a rural rice farm, makes for a strong change of tone. It rounds off her character development admirably, as well as highlights some of the less pleasant aspects of Japanese culture - such as the parents of a criminal sharing the blame for their child's crime.

This is a confident, political film that wisely uses those politics to inform a narrative story rather than overtake it. While it lacks the tight visual compositions of The Most Beautiful or Sanshiro Sugata Part II it has a much better handle on character and story, which are the areas in which I think Kurosawa's talent most clearly lay.