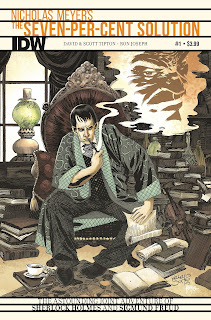 IDW does a lot of licensed comic books - one gets reviewed under the cut, for example - and they tend to fall into two camps. The majority are adaptations of pop culture properties from film and television. A small group, however, adapt novels and short stories, whether adapting Heinlein's A Citizen of the Galaxy or Matheson's The Incredible Shrinking Man, or Adams' Dirk Gently.

Their latest effort seems a particularly unusual one: an adaptation of an adaptation, making a serialised comic book out of The Seven Per-Cent Solution, filmmaker Nicholas Meyer's cult classic tribute to Sherlock Holmes.

Ron Joseph's artwork is perfectly pitched for this sort of 19th century pastiche, and Jordi Escuin has coloured it with a lot of subtlety and richness. Where it perhaps stumbles is in the excessively wordy dialogue and text passages. It's always a challenge to take prose and strip it down to a highly visual form like a graphic narrative; in this case I'm not quite sure that David Tipton and Scott Tipton have entirely produced the best possible adaptation. Still, it's intriguing, and a good story, and Holmes enthusiasts will likely find much to enjoy. (3/5)

Under the cut: reviews of Godzilla in Hell, Ragnarok and We Are Robin.

The creative hands on Godzilla in Hell get handed over to legendary fantasy and science fiction artist - and noted Godzilla enthusiast - Bob Eggleton. Unlike issue #1, which was entirely silent, this issue is narrated by regular small text blocks. Godzilla marches through another layer of hell, fighting the souls of the monsters he has already battled before: Rodan, Anguirus, Varan (whom I admit I had to look up), and King Ghidorah. Like the first issue this isn't really a comic that you read for the story. It's beautiful to look at, however, with Eggleton providing stunning fully painted artwork of a kind you rarely see in comic books. This is a strange, haunting and artful miniseries that's working so much better than it has any real right to. (5/5)

Legendary comic book writer/artist Walter Simonson tackles the fabled fall of the Norse gods in a typically epic and enchanting fashion. This feels like a good 20 years out of its time - the crisp, clean artwork and exaggerated designs all feel like something more suited to the mid-1990s than 2015. That's not a criticism, however: it would have been an entertaining and beatiful-looking comic book then, and it certainly remains so now. It's also nicely distinct from Simonson's other work for that other company on the other Thor Odinson. (4/5)

Riots on the streets, and ticking bombs in the Gotham City subway. It's down to an assembled mob of improvised teenage vigilantes to solve both problems - with an expected but still satisfying little revelation at the end. This is a really promising book that pretty much does what DC was advertising Gail Simone's The Movement as doing a couple of years back - the Occupy movement as represented by crime-fighting costumed heroes. It's a neat idea and so far Lee Bermejo is doing a great job with it. (4/5)
Posted by Grant at 5:34 PM