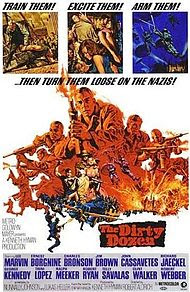 I adore a good war movie, and The Dirty Dozen is one of the best.

Bad movies are the easiest things to review, because you can let fly and break it to pieces. Good movies are not quite as easy, but provide plenty of fodder for discussion or praise. The mediocre movie is harder, because it's neither here nor there: nothing so bad you need to point it out, and nothing so good that it's worth talking about. To me the hardest film to review is the great movie: the movie that's so good that you don't really want to go into depth about its merits - you simply want to shrug and point to it, and let everybody else bask in its obvious brilliance. The Dirty Dozen is one of those films.

Lee Marvin plays Major John Reisman, tasked with a seemingly impossible mission: take 12 military prisoners destined for life imprisonment or death row, and train them into an elite squad capable of sneaking behind enemy lines and assassinating a château full of German officers. The film follows the selection and training of this "Dirty Dozen", their demonstration of their talents during a war game, and finally the mission itself.

I have always loved Lee Marvin as an actor: he's one of those performers who superficially seems to play the same part in every film in which he appears, but upon closer inspection does a remarkable amount of naturalistic work. He's immediately likeable, and he's very believable - likely in part to his own experience as a marine in World War II. This is, first and foremost, his movie, and we feel his pride as they bond into a cohesive unit, his controlled anger as their abilities are questioned, and his sadness when not all of them make it out of their mission alive.

His men are cast with an impressive array of talent. John Cassavettes is exceptional as the angry, rebellious Franco. Charles Bronson gives a typically dry, understated performance as Wladislaw. Donald Sutherland plays Pinkley, a credulous and idiotic young man who acts as the film's main comic relief. Most striking of all is probably Telly Savalas as Archer J. Maggot, a misogynist serial murderer who brings about the film's most disturbing and horrific moment.

The darker elements of The Dirty Dozen are part of what makes it work so well: war is hell, so the saying goes. Director Robert Aldrich doesn't let you forget. People get shot. People are wounded. People die, in startling and genuinely horrible ways.

Balanced against the violence and the warfare are moments of wonderful comedy. The cast play off one another beautifully. While Marvin is undoubtedly the star, it is a highly effective ensemble piece. Part of why they work so well as an ensemble is because they all feel like real people. The acting is, by today's standard, relatively broad, but the characters all have integrity. Even the malicious, constantly threatening Maggot is afforded moments of understanding and unexpected depth. The screenplay makes you care about these characters, and root for them.

This is not a film of which I grow tired. If anything, I like more every time I watch it. It's one of the best American films ever made.
Posted by Grant at 7:19 AM