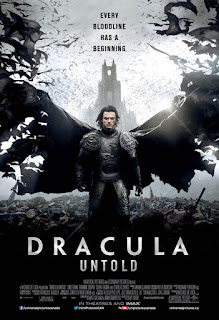 Bram Stoker's Dracula has been adapted to cinema so many times that it must be getting difficult for filmmakers to find a fresh angle. Universal Picture's Dracula Untold essentially has a go of presenting the character through the lens of a Peter Jackson Lord of the Rings movie: the results are patchy and oddly truncated, but I can't lie and pretend I didn't enjoy it overall.

Dracula Untold takes place in 14th century Transylvania, where the ruling Prince Vlad (Luke Evans) is forced to give annual tribute to the Ottoman Empire. When the imperial soldiers arrive to take not gold but Vlad's own son, he resists - and in a desperate attempt to stave off war he makes a pact with a vampire living in the mountains above his castle. He is given the power of a vampire for three days - so long as he can resist drinking human blood, otherwise he will be cursed with immortality forever.

This film took about seven years to make it out of development. It almost got produced with Alex Proyas (Dark City) directing, which could have been quite a thing to see. First-time feature director Gary Shore is no slouch, mind: for all its narrative issues Dracula Untold is a gorgeous movie to look at. It's kind of like Snow White and the Huntsman in many respect, albeit with much less rampant pomposity.

It's not just the visuals that work. Luke Evans does a great job as Vlad, showing a very old-fashioned sort of dashing gravitas and presence. I liked him as the villain in Fast & Furious 6 and I liked him as Bard in The Hobbit, and he's similarly entertaining here. Also very strong is Charles Dance as the ancient vampire that grants him his power, although he's criminally under-used. It feels like scenes have been removed during post-production.

That's actually one of the film's biggest flaws: the thing feels oddly gutted, running to a few minutes shy of 90 minutes including credits and rattling along at a breakneck pace. Pretty much any scene not directly involving a swordfight or a visual effect appears to have been cut out. I have no idea if this is the case, but this film reeks of studio interference; some executive pushing out any scene that has conversations in them out of fear the audience would get bored by a plot. Without them the film is remarkably slight and brief; relatively fun while it's there, but it's simply not there for very long.

This is a pity, because there's just enough here to suggest that a medieval action origin for Dracula would really work rather well. I'm not entirely convinced it works here - it's ultimately all rather derivative and slight - but it does suggest the possibility of a stronger film in the margins. There's rumours that Universal will be using this film to kick-start a relaunch of their classic monsters franchise of horror movies, and certainly an intriguing coda at the film's end suggests something of this nature. There's potential: I'd actually quite like to see where Universal goes from here.
Posted by Grant at 11:02 PM