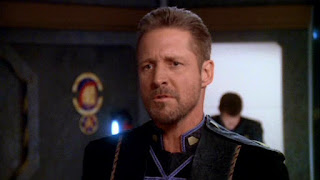 Sheridan's fleet advances on Mars and Earth for the final battle with President Clark's forces. On Mars, Franklin and Lyta put Sheridan's secret weapon into effect. As Ivanova slips away, Marcus takes her survival into his own hands.

"Endgame" is all climax, and as a result it rattles along at a pretty incredible pace. Going in I had expected it to maybe cover the defeat of Clark's forces around Mars, but as it progresses Sheridan all but leapfrogs Mars altogether, hits Earth's orbit and overthrows a government in 40 minutes. Such a sudden advance in the story could be disastrous if not written well, but to his credit J. Michael Straczynski has done a sensational job of setting up and plotting this episode. A key part of his strategy has been the set-up: it's been mildly frustrating in earlier episodes waiting to find out what Sheridan's plan was to use the Shadow-enhanced telepaths on Babylon 5. That frustration pays off here, allowing the story to jump about a full episode's worth of plot and reach an immensely satisfying conclusion.

Viewers expecting some kind of face-to-face confrontation between Sheridan and Clark will be disappointed. As has been the approach throughout the series Clark remains a semi-anonymous figure right to the end. We don't see him talk here, but we do see him put a gun to his head and commit suicide in a moment designed to echo Hitler's final moments in a Berlin bunker. I think it was a very bold move to make Clark such an invisible force, rendering him in effect to a simple plot cypher. The truth is, a cypher is all that he needed to be: we've all seen and read about enough real-life dictators and despots to fill in any blanks for ourselves. The series was never about Clark, or his government, and throughout the focus has rightly remained on how that government affected the regular cast of characters.

It affects Sheridan deeply here. When the battle is won, and Clark is dead, Sheridan's allowed a quiet moment of relief. He looks one thought away from bursting into tears. It's a beautifully played bit by Bruce Boxleitner, and it's nice to see the series allow his character such a grounded, realistic reaction. Too often these stories end with command centres full of people clapping and cheering, and not enough with people running for a quiet room so they can bawl their eyes out. There's a similarly great scene towards the episode's end, as ISN re-commences its regular broadcasting, with its former newsreader - whom we haven't seen in more than a season - struggling to compose herself while announcing Clark's defeat.

The use of the Shadow-enhanced telepaths to disable the Earth Alliance ships is a controversial move, and the episode wisely has one of the supporting characters challenge Franklin on its ethics. Sadly she's either a terrible actor, or was directed very poorly, because she fumbles the timing of the line. It turns what should be an important and valuable moment into a bad cliche. It's a rare mistake in an otherwise exceptional episode.

The episode's final scene is perhaps its best: Marcus has returned to Babylon 5 and wired himself up to the deadly alien machine previously seen in "The Quality of Mercy" and "Revelations". The scene is told entirely in one tracking shot, moving through the station's medical lab among smashed up equipment and unconscious security officers before reaching Marcus, slowly dying as the machine transfers his life force to Ivanova. It's such a sharp contrast to what we've just sat through, replacing all of the joy and relief at Sheridan's victory with sadness and dread. It's perfectly pitched.