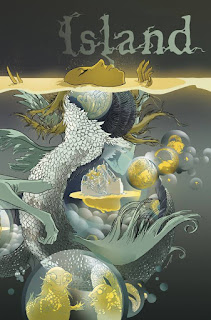 Two issues in and I remain very enamoured with Island, the new anthology comic put together by Emma Rios and Brandon Graham. It's basically the size of a trade paperback each month, filled with a variety of inventive, odd strips and serials; a sort of Metal Hurlant for the USA indie comics crowd. The second issue launched this week, and so I immediately picked it up to have a look.

Ludroe's "Dagger Proof Mummy" continues from last issue. This second half is a lot more accomplished than the first. Perhaps Ludroe became more sure of himself as he went. At any rate it's a positive beginning to the book, combining cat people, near-future urban skateboarding and the undead.

The second half of Emma Rios' "I.D." feels a bit more assured and confident than the first, and it certainly packs a fairly emotional punch by the end. I particularly liked the essay at the end by Dr Miguel Woodward, who advised Rios on the science involved in her near-future body-swapping story.

The real star of the book for me, however, is the incomparable Simon Roy and the first part of his new story "Habitat". Anyone who read his work with Brandon Graham on Prophet will be right at home here, as will any fans of French writer/artist Jean "Moebius" Giraud. It's beautifully written and strange, and Roy's art is distinctive and showcases a wonderful visual imagination. The only drawback is that the next instalment is not due until issue #5.

Island is a fascinating experiment, and one that I really do hope succeeds. (4/5)

Under the cut: reviews of Black Canary, Book of Death and Robin: Son of Batman.

This issue cuts back and forth beautifully between a pitched battle between motorcyclists and a bus on the open highway, and a rock concert. It is really effectively done, using a lot of small, fast, well-placed panels to showcase both the music and the action. The plot advances nicely as well, with an unexpected reunion for Diana and an unforeseen plot development to push the story into the next phase. This is one of DC's best new titles, and I really hope it secures a long-term audience. Fletcher, Wu and Black Canary all deserve it. (4/5)

Valiant's big crossover mini-series reaches one of the staples of its genre: the big superhero versus superhero punch-up. In terms of scripting, Robert Venditti doesn't really bring anything to the table that hasn't seen before, but certainly Gill and Braithwaite illustrate this issue extremely well. It's a fast-paced enjoyable action sequence, and the following pages do advance the story well, but it's simply good and entertaining - not ground-breaking. That still has its place of course, but I did finish this issue wanting something more. (3/5)

Robin's attempts to repair the damage done to people around the world in his early years continues, as does his temporary partnership with Nobody - the teenage daughter of a super-villain he killed some time ago. It's a fascinating combination that's really exploiting the strongest elements of Damian Wayne as a character: he may be Batman's son, but he's also the son of Talia al Ghul, and he tends to walk a tightrope between doing right and indulging in extreme violence on a day-to-day basis. Gleason and Gray's artwork remains impeccable. (4/5)
Posted by Grant at 7:32 AM