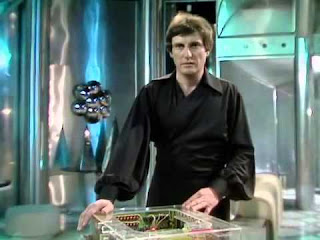 An Andromedan invasion of the Milky Way has been averted. The Liberator has sustained heavy damage, forcing its crew to abandon ship. Avon (Paul Darrow) wakes as his escape pod crashes onto the planet Sarran. There he meet weapons specialist Dayna Mellanby (Josette Simon) and her father Hal, and in unwillingly reunited with the similarly stranded Servalan (Jacqueline Pearce) - now President of a severely damaged and chaotic Federation.

TV dramas often have to adjust to changes in cast. If an actor leaves the series, it's usually a simple matter of writing them and perhaps replacing them with a similar character - or in some cases of keeping the character and having another actor play the part. It's a trickier proposition when the actor choosing to leave is your main character, and trickier still if - as was the case here - that it's the title character tendering their resignation. After two years of playing rebel leader Roj Blake, Gareth Thomas quit to return to the theatre. Blake's 7 producer David Maloney and script editor Chris Boucher considered numerous tactics to replace him, but settled on perhaps the most unusual option available. Why introduce a new rebel leader when you can segue Avon into the position instead?

To be completely honest, this is where Blake's 7 gets really interesting. There was always a problem with Blake that was a problem affecting many science fiction heroes: he was relatively boring. The character needed to be noble and heroic, in very black and white fashion. Boucher and Maloney flirted with Blake's growing zealotry as the series developed, but he remained a fairly predictable and unimaginative character.

At the same time Avon had developed as a particularly effective and intriguing figure: intelligent, but also self-interested, callous and manipulative. As a supporting player he added an element of uncertainty to the story, as you never seemed quite certain in which directions his motivations lay. By making him the new lead, however, all of those elements that made him so entertaining as a supporting character suddenly make him almost unprecedented as a protagonist. I think it was Roy Kinnear, who guest starred in Season 4's "Gold", who described Blake's 7 as 'the only show on television where the hero is a complete bastard'.

As a set-up for a series, Avon is a much more fascinating central character than Blake. The quality of the individual episodes may rise and fall, but in this respect the second half of the series towers over the first.

Gareth Thomas was not the only actor to resign: Sally Knyvette also departed, unsatisfied with how little she was given to do. Her replacement, introduced in this episode, is Dayna (Josette Simon). She's introduced as a strong-willed fighter: she designs advanced handguns, and in her spare time masters the use of bows and arrows and other more primitive weapons. By the episode's end her father has been murdered by Servalan, which not only frees her to leave with Avon for the Liberator but also gives her a vengeful motivation to join him.

It's worth noting the shift in personality that Servalan undertakes in this episode. For the first two seasons she was a calculated professional. Hereon in she is a much more flirtatious and sexualised character. She forms a weird mutual attraction with Avon that continues through the series. She also begins to turn up in increasingly unlikely places, effectively replacing Travis as the series' constant 'bad penny' villain. There is a sort of camp entertainment value with Servalan in these later episodes, but there's also no questioning that she's a weaker character as a result.

The actual storyline of this episode is rather weak. It introduces Dayna capably, and establishes Avon as the new lead character, but there's also a lot of mucking about with primitive barbarians riding around on beaches while shouting. It all feels awfully generic. The opening scenes, which depict parts of the great Federation versus Andromeda battle, are just plain awful. Model shots have been cobbled together from older episodes with new voice-overs. If you hadn't seen the earlier episode from which the shots originated, it would simply be a very poor quality array of randomly edited model shots. If you have seen those earlier episodes, it simply doesn't work.

Despite these flaws, Paul Darrow and Josette Simon make it work. The series feel fresh, and as it ends with another cliffhanger - Federation officers have hijacked the Liberator - it seems as if the series has found an entirely new lease of life with all manner of potential directions. Season 3 begins with a wonderfully entertaining start.
Posted by Grant at 5:57 PM