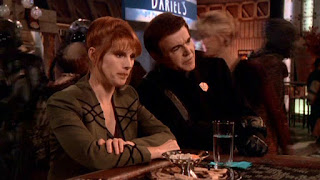 Civil war rages across Minbar, and Delenn (Mira Furlan) is forced to surrender to the warrior caste before more lives are lost. On the station, Lyta Alexander (Patricia Tallman) struggles to find work as an unregistered telepath - until Mr Bester (Walter Koenig) arrives with a proposal for her.

So the Minbari civil war ends rather abruptly here. It's felt oddly truncated. When this season was produced, it was strongly suspected by the producers that there was not going to be a commission for the fifth and final season. As a result some plot threads after the Shadow War got truncated to ensure the series could close up shop at the end of its fourth year. I don't know for sure if the Minbari War was one of the truncated threads, but given how it's played out I'd be surprised if it wasn't. With that limitation in mind, it's actually quite a satisfying conclusion.

Where the truncated storyline (assuming that it is) suffers the most is in how it depicts Neroon. This powerbroker within the warrior caste has been an occasional thorn in Delenn's side for some years, and only last episode betrayed her to bring about the warrior caste's victory. Here he has a last minute change of loyalty, sacrificing himself to save Delenn's life and end the civil war. Or it was his and Delenn's secret plan all along. To be honest the episode is too rushed to be entirely clear.

Back on Babylon 5 Bester comes to Lyta offering her full accreditation as part of the PsiCorp. The only conditions are that she has to wear the badge again, and when she dies - and only if by natural causes - the Corps gets her Vorlon-modified body to examine and dissect. Lyta understandably refuses, sparking off a beautifully written and quite gut-wrenching series of manipulations by Bester to get what he wants. By episode's end a tearful Lyta is putting on the badge and black gloves of the Corps, Bester's got her body once she dies, and it seems clear that it's Bester who has been behind Garibaldi's kidnapping, brainwashing and radical change of personality this season. Koenig seems to get better and better each time he turns up in the series. He's marvellous here.

This is an episode where the narrative moves forward in a satisfying fashion, and yet none of our heroes ultimately get what they want. On top of that there's a gut-punch of a final scene: Clark's Earth Alliance has opened fire on ships of refugees and civilians, killing 10,000. The growing propaganda war between Babylon 5 and Earth just spilled out into genuine violent conflict. One civil war ends, and another finally begins.

This was a great episode. Nine good episodes out of 14 gives Season 4 a quality ratio of 64 per cent.
Posted by Grant at 7:41 AM