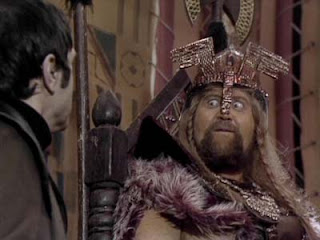 Blake's wild goose chase leads him to the planet Goth, where a Federation cyber surgeon once went underground - leaving behind the coordinates of Star One behind. Blake, Jenna and Vila teleport down to investigate, only to discover that Servalan and Travis are already there.

It's also difficult to fault him for stealing the coordinates to Star One early in the piece, taking Servalan's pursuit ship and getting the hell out of Dodge before Servalan, Blake or anybody else is any the wiser. The character has been poorly used this season. It's a combination of inconsistent writing with a change of actor (Stephen Greif to Brian Croucher). The result has been a much less interesting villain: all of the texture and cool professionalism is gone, replaced by a manic, gloating psychopath. In many respects he reminds me of Doctor Who's 1980s revival of the Master, where Roger Delgado's calculated, suave antagonist was replaced by Anthony Ainley's gleeful pantomime bastardry. In neither case did the replacement come close to the quality of the original.

Much of this episode focuses on Jenna and Vila's captivity at the hands of the barbarians of Goth. They're intended as viking warriors, I suppose, but their hairstyles and thick moustaches make them all look more like members of the popular metal band Motorhead. The Goth's leader Gola is over-acted with enthusiasm by Bruce Purchase, who becomes besotted with Jenna (Sally Knyvette) and makes her his queen. Vila (Michael Keating) is stuck playing the fool - much to the chagrin of the real king's fool - and Blake sneaks around some tunnels with Gola's resentful brother (a similarly over-enthused Shaun Curry).

It's ultimately so ridiculously silly and inconsequential. It's better than Allan Prior's other scripts this season, but that doesn't actually mean it's good. "Gambit" was ridiculous and silly, but its cast seemed to be having a good time so it was relatively easy to go along with the ride. In "The Keeper" much of the cast seem slightly embarrassed instead, and so that sort of awkward inability to look away rubs off on the audience instead. 12 episodes into the season, and seven have been good: the quality ratio slips back down to 58 per cent.

It does conclude with some movement in the overall story arc: Blake has the coordinates to Star One, but Travis got them first and is already on his way. The stage is set for a final showdown in the season finale.
Posted by Grant at 5:03 PM