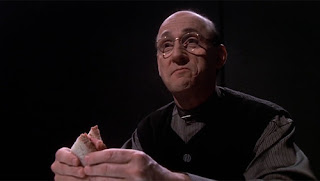 Right from the first shot, which tracks towards John Sheridan (Bruce Boxleitner) low to a prison floor, it's clear that "Intersections in Real Time" is not going to be a normal episode of Babylon 5. It pretty much only features two actors and one room, and one prolonged interrogation. I've been saying since I started reviewing this series that I thought J. Michael Straczynski is a writer better suited to theatre than to television, and this is positive proof. It is essentially a play that's been nicely photographed and edited down to 40 minutes.

The Earth Alliance have captured Sheridan, and a man (Raye Birk) has been assigned to interrogate him. He's calm, detached and almost disinterested, but over the course of the episode he needles away at Sheridan's resolve in an attempt to get what he needs - Sheridan psychologically broken, and willing to recant in public his rebellion against President Clark.

There are a lot of clear antecedents to this episode. The most obvious is George Orwell's science fiction novel Nineteen Eighty Four, which climaxes with a near-identical scene of torture as the protagonist is mentally and emotionally broken before a final, terrifying transfer to "Room 101" (Room 17 in Straczynski's version). Another is, unsurprisingly, Patrick McGoohan's classic TV drama The Prisoner. Straczynski has riffed on this series many times over the past four seasons, so it's not a surprise to see a similar turn of phrase and paranoid narrative used here. It's also clearly influenced by real life - for much of the episode Sheridan is tortured and interrogated in precisely the same way people are tortured and interrogated in the world today.

It's that last influence that gives "Intersections" a lot of its dramatic strength: it feels real, much more so than other episodes of the series, where any attempts at realism are automatically blown out of the water by all of the aliens, spaceships and telepaths. Compare this, for example, to Sheridan's last interrogation back in "Comes the Inquisitor", which was a bit too cute and self-aware for its own good. Here it's all horrifyingly banal, nothing more so than the interrogator himself: a small, bald man in glasses, who fusses around his his briefcase and emphasises that he has no emotional stake in Sheridan's welfare whatsoever. Raye Birk's performance is pitch-perfect, playing a character so morally corrupt that he doesn't even seem aware of his own corruption.

The episode is strengthened by its unique structure. We never leave Sheridan's interrogation. By-and-large each act between commercial breaks is a single scene. By forcing us to stay with Sheridan as he is manipulated and tortured, we are hit with a much more profound emotional effect. This is a really heavy episode that showcases some very unpleasant things. The ending in particular is depressing as all hell - and viewers back in 1997 would have to wait four months to find out what happened next. At the time the episode was in production, there was serious doubt that Babylon 5 would be recommissioned for a fifth and final season. Wanting to ensure that a four-season series would have a satisfying overall arc, Straczynski re-arranged and truncated a few storylines. He's since confirmed that, had he known a fifth season would go ahead, then this episode would have been the Season 4 finale. It's a hell of a place to leave an audience hanging.

Sheridan barely says a word, as he passively and resentfully resists his interrogator. Bruce Boxleitner gives pretty much the best acting I've ever seen him deliver. He looks progressively worn-down and exhausted as the episodes goes on, and he draws so much emotion and rage from a simple glance, or a one-word sentence.

So: taken in isolation, "Intersections in Real Time" a genuinely brilliant piece of television. The script is about as strong as Straczynski has ever written, the performances are outstanding, and the direction is well-measured and visually strong. My only real caveat is how the episode fits into Babylon 5 as a whole. The episode spends a lot of time mimicking Nineteen Eighty-Four, and its presentation of an immutable, unbeatable system that grinds down the individual beneath it. I'm honestly not sure if that's what Clark's Earth Alliance actually is. There's been plenty of chaos, and dissent. We know the Psi Corps are heavily involved, and we know their involvement is resented and feared by many in power. We've already seen a large number of Alliance officers and starship crews are willing to defect and join Sheridan's battle fleet. In effect, everything the series has shown us is of a fragile, chaotic and paranoid Earth government topped by a charismatic murderer. What this episode shows us is almost its exact opposite - and I'm not entirely sure that works.

Still, if you can put that to one side and simply enjoy this episode on its own merits, then it's one of the best Babylon 5 episodes ever made. 18 episodes in, and we've had 12 good ones: the Season 4 quality ratio rises to 67 per cent.
Posted by Grant at 5:08 PM