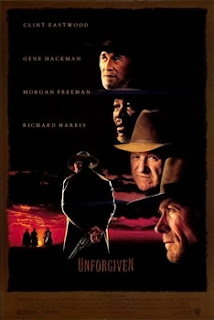 William Munny (Clint Eastwood) is a former outlaw and murderer. He quit drinking, married a woman, had two kids, and then lost his wife to smallpox. Now he's a pig farmer out in the middle of nowhere. When he hears of a bounty on two ranchers who mutilated a prostitute, he sets out along with his old partner (Morgan Freeman) for one last ride.

Unforgiven was a critical phenomenon back in 1992, receiving widespread and enthused acclaim and ultimately winning four Academy Awards including Best Picture. It's not difficult to see why. It's not that it's simply an outstanding film - and it truly is - it's also Clint Eastwood's final word on the western genre. He was arguably the last great western star Hollywood ever had, starring in numerous classics including A Fistful of Dollars, The Good the Bad and the Ugly, Hang 'Em High, High Plains Drifter, Joe Kidd and Pale Rider. Unforgiven came seven years after Pale Rider, which had at the time seemed like it was Eastwood's final word on the genre.

Pale Rider was great, and remains one of my favourite westerns, but it didn't really sign off on Eastwood's western career in any definitive way. Unforgiven feels like one hundred per cent a sign-off, to such a degree that it's fairly unimaginable that he could revisit the director again. The film is almost entirely focused upon the gap between the western myth and the western reality. Characters arrive with enormous reputations, only to have those reputations punctured. The Schofield Kid (Jaimz Woolvett) boasts of murdering five people - he hasn't. English Bob (Richard Harris) coasts through life as one of the greatest crack shots of all time - he isn't. Even William Munny and his friend Ned Logan (Freeman) are supposed to be two of the most dangerous men in the west; one can't shoot straight any more, and the other is so turned off from a life of murder that he can't kill again.

There are shoot-outs, as one would expect from a western, but they're messy and appalling. One gunfight involves six people, and only one of them actually gets shot - and rather than some neat Wilhelm scream and a fall from a horse he gets gut-shot and takes minutes to die. Even the film's climax is brutally short and unpleasantly blunt.

The film follows a broadly regular pattern of setting up a legend, and then breaking it to pieces. The only character who seems immune is the town sheriff "Little Bill" Daggett (Gene Hackman), and he remains resolutely wrapped up in his own mythology. He's a violent, cruel man, who punishes two men's attempt to slash up and murder a woman by fining them several horses. When words spreads that the prostitutes have offered a thousand dollar reward for anyone willing to kill the two men, Little Bill violently beats up or murders anybody who comes with an intent to collect. Hackman does a great job with the part as well, presenting a man who's both charismatic and often-times quite funny but simultaneously quite monstrous.

Eastwood plays his role with a low-burning intensity, which is pretty much what he does best. Morgan Freeman and Richard Harris both acquit themselves admirably. Anna Levine is particularly impressive as Delilah Fitzgerald - her violent assault and mutilation is what propels the story into motion, and it's good that she gets at least a few scenes to establish herself and her own personality rather than simply be an anonymous trigger for Eastwood's story.

The film looks great. The whole environment seems soaked in rain and mud, belying the usual sunny, panoramic look of the genre. It feels as old and exhausted as its protagonist. In many respects the film prefigures David Milch's exceptional HBO series Deadwood; it seems hard to imagine one without the other leading the way. Unforgiven also has a fairly slow pace, which is typical of Eastwood's films as director. While he takes his time he doesn't waste it: it may be a little measured, but it's incredibly rich in character.

There are good and bad westerns, and there are also the rare great ones. Unforgiven is absolutely one of the greatest.
Posted by Grant at 7:19 AM