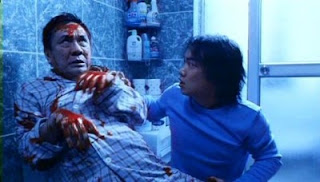 Peter (Eason Chan) is a hairdresser living in Hong Kong. He meets a mysterious girl with an eyepatch, June (Shu Qi), and they have a one-night stand. He subsequently meets her again, and discovers the reason she wears the patch: June sees ghosts and apparitions with her left eye. Once drawn into her supernatural world, Peter finds himself helping her solve a series of possessions linked to a traffic accident some years earlier.

When viewed strictly as a horror film, Ann Hui's Visible Secret is a disappointment. The bottom line is that it is simply not particularly frightening or creepy. The scenes of foggy back alleys, harsh downlights and moaning sound effects have been done to death in so many other films, and Hui brings little fresh to the genre to make her film stand out or break from the pack. At the same time the film is curiously watchable. There's a really nice romance at its centre between a woman with too many secrets and a young man too well-intentioned to leave her.

I've written a few times in the past about my general dissatisfaction with Hong Kong horror cinema. They're all too often silly rather than scary, and all too often devolve - as Visible Secret does - into scenes of shrieking protagonists running away from shambling ghosts and monsters. While there's clearly plenty of scope for horror and comedy to co-exist in the one film (Ricky Lau's Mr Vampire is one notable Hong Kong example), it has to be done with care. I don't sense that sort of care here. If anything Hui seems disinterested by the genre. The horror elements feel perfunctory and passed over in favour of the romantic and character-based elements.

To be fair there is one horror element that is fantastic: a weird Chinese opera performer in full white-faced make-up that Peter keeps seeing riding the Hong Kong subway system. Unfortunately she proved too scary in promotional materials, particularly those used in the real-life subway, and was largely cut from the film's final edit.

The romantic half of the film does generally work very well. June is a complicated woman with numerous secrets and a seemingly volatile personality, and Peter does his best to unravel who she is and help her find some peace. Unfortunately it's all spoiled by a slightly confused final act, which is clearly intended to evoke the sort of game-changing shocks engineering by M. Night Shyamalan's The Sixth Sense. The influence of The Sixth Sense is all over Visible Secret: one wouldn't exist had the other not been an international hit.

Eason Chan does a strong job of playing Peter, a fairly incompetent protagonist whose strongest facet is his dogged insistence to get to the bottom of a mystery. He's saddled with one of the strangest running jokes I can remember: he's a hairdresser, but an incompetent one, so every customer he serves get an identical embarrassing bowl cut. Shu Qi does a great job as June, a character whose complicated personality and weird inconsistencies only make sense during the film's denouement. The film also features a bizarre short cameo by Anthony Wong that's just long enough to get one's hopes up that he's going to be properly in the film.

Altogether Visible Secret doesn't gel together. While there's certainly some quality stuff buried in its middle, it's the sort of character-based drama done slightly better elsewhere. Its horror elements just aren't that good - particularly when compared to the other Hong Kong horror films released at the time, which were uncharacteristically decent. When you line Visible Secret up opposite the likes of The Eye or Inner Senses, there's not really a contest. It's a film that's drunkenly slipped between two schools, and winds up not really pleasing anyone.
Posted by Grant at 7:58 AM