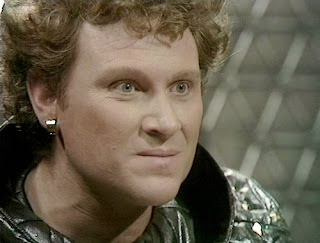 Vila (Michael Keating) is unwillingly dispatched to the planet Kezarn to provide his lock-picking talents to a peaceful civilization of nomads. In return the Liberator crew will be paid with valuable crystals necessary to power the ship's weaponry. When Vila teleports down, however, he discovers the invitation was a ruse and he is now the prisoner of the notorious criminal Bayban the Butcher (Colin Baker). Now he is forced to unlock an unlockable door simply in order to survive.

The origins of "City at the Edge of the World" are fairly well known to Blake's 7 fans. Michael Keating's daughter was being mildly bullied at school over her father's cowardly character, and so Keating asked script editor Chris Boucher to include a story in the third season that could showcase Vila being brave. Boucher complied, and the resulting episode is probably the best episode Blake's 7 produced up to that point.

The strength of "City at the Edge of the World" is not in how it makes Vila the hero of the piece, but in how it does so without sacrificing the character's personality and specific skill set. It's a beautifully tailored script, in which Vila excels purely because he's outstanding at breaking locks and opening seemingly unopenable doors. It even manages to give him a brief romantic adventure with one of Bayban's more reluctant space pirates, Kerril (Carol Hawkins). It's not a particularly believable romance - it begins and flourishes in the space of a few hours - but it's a lovely change of pace for the character and is performed very well by the actors.

Michael Keating grabs the episode's focus on his character with both hands and works it for everything he's got. This really is Vila's finest hour, expressing all of the character's intelligence, wit, cowardice and underlying bravery. It even maintains his optimism in the face of a typically defeatist ending. The heroes never fully win in Blake's 7, and it's no different for Vila when working on his own.

Boucher also does some strong work with the other four regulars. Tarrant's (Steven Pacey) shifting characterisation is pushed even further into being an unpleasant bully - in the episode's opening scene he pushes Vila so far it's a wonder Vila ever comes back. Avon's (Paul Darrow) reaction to Tarrant once Vila teleports down is brilliant: he delivers a sharp, threatening reminder to Tarrant that talented thieves are incredibly rare and valuable while boorish bullying space pilots are easily replaced. Cally (Jan Chappel) gets to be the warmer, more sentimental member of the crew. She cares for Vila's safety not because he's needed but because he's a friend. After five episodes Dayna (Josette Simon) finally gets to become a talented fighter and weapons inventer again, which is refreshing.

I'm not surprised that Boucher personally writes Tarrant in the manner that he does - Boucher was always the most cynical writer on Blake's 7, adding his extensive darker touches to other people's scripts, and practically wallowing in terse, self-interested snark when working on his own.

Boucher's script is littered with solid comedy, all delivered in a very wry, sardonic sort of fashion. There is broader comedy, but that's most often provided by two of the guest actors: John J. Carney as Sherm and Colin Baker as Bayban. Baker delivers a gloriously over-the-top performance, really squeezing everything he can out of what he's given. He's in a ridiculous studded leather outfit, and glowers and rants his way around the studio like nobody's business. He's an actor with an outstanding screen presence - even here it's obvious why he'd have been cast as the Sixth Doctor in Doctor Who, even if the results of his tenure in the role were marred by such poor scripts.

Also guest starring is Valentine Dyall as Norl, the leader of Kezarn's nomadic population. It's an understated, dignified performance that successfully exploits a minimum of dialogue and screen time.

Quite frankly the episode would have been sufficiently entertaining with just the focus on Vila and the entertaining space pirates, but Boucher also weaves in a genuinely good science fiction story as Vila and Kerril explore beyond the sealed door to discover the truth behind Kezarn's people and the mysterious abandoned city on the planet's surface. The scenes beyond the door are very well shot by Vere Lorrimer, with camera angles that manage to move beyond the standard eye-level static camera work that typified BBC studio productions. The sets are also rather cleverly developed, with several appearing to utilise the studio's own ceiling as a part of their design.

This is the best Blake's 7 episode so far in this rewatch, combining the very best the series has to offer: bold performances, ridiculously endearing costumes, sharp dialogue, great characters, and well-presented science fiction. After the last few episodes it's an enormous relief. We're six episodes into the season now, and the quality ratio shifts back up to 50 per cent.
Posted by Grant at 4:50 PM