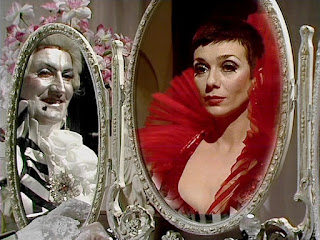 Blake and his crew arrive at Freedom City, a sprawling criminal hive just beyond the Federation's reach. Blake is there to track down Docholli, a renegade cyber-surgeon who may be the only person who knows where the Federation central control base Star One is located. Travis is there as well, guarding Docholli and waiting for Blake to arrive. Servalan is there too, hunting down both Docholli and Travis. Meanwhile Avon and Vila sneak off to steal several million credits from the local casino.

Here's the thing: "Gambit" should be egregiously awful. It features Jenna and Cally faking a cat fight as a distraction. It's got Travis bumming around a spaceport in a cloak and a floppy hat. It has Avon and Vila shrinking Orac to the size of a pocket calculator and smuggling it into a casino to fleece it for millions of credits. That casino is run by fops dressed in regency period clothing with silver make-up, and is hosted by someone who's walked out of a Wiemar Germany cabaret nightclub. The costuming is pretty much the most insanely over-the-top and nonsensical as Blake's 7 will ever have. Put simply, this episode absolutely should not work - and yet, strangely, it does.

"Gambit" is tremendously good fun. It feels, rather bizarrely, like a Shakespeare comedy. Everybody's schemes and plans are tripping over everybody else's. It's not directly played for laughs, but it's definitely played with its tongue embedded deeply in its cheek.

Perhaps surprisingly Blake doesn't actually get too much to do here. He travels to Freedom City, and he visits a bar near the docks in search of Docholli, but the focus is very much elsewhere: on Docholli himself, and his relationship with Travis as his bodyguard, and on Servalan's search for both of them. We get plenty of Servalan here, as she negotiates Docholli and Travis' capture with Krantor, the pompous aesthete who owns and runs the entire city.

The episode's highlights are generally any scenes between Servalan (Jacqueline Pearce) and Krantor (Aubrey Woods). Woods over-plays the part wonderfully, while Pearce carefully balances Servalan's seductive exterior with a barely hidden contempt for Krantor's deceptions and sexual overtures. When separated, Krantor bitches about Servalan to his assistant Toise (John Leeson, aka the voice of Doctor Who's K9) while Servalan struggles to explain her master plan to her curiously stupid lieutenant Jarriere (Harry Jones).

While all of this is going on, Avon and Vila sneak off to "the Big Wheel" to steal several million credits by hacking their computer-controlled roulette wheels. When Vila wins too much, he's forced to play a life or death game of speed chess against the mysterious Klute (Deep Roy). It's a largely very silly, very inconsequential subplot, but in the context of this episode it works. This whole episode is generally weird, ridiculously silly and knowingly camp. It's not quite a full-blown comedy, but it's certainly as close as the series will ever get.

The costuming is so ridiculous, with supporting characters and extras seemingly dressed in whatever the BBC costumes department had to hand: Victorian era, Regency era, Jacobean era - a knight in chainmail could walk through the scene without seeming out of place. It's ridiculously haphazard and all over the place - so utterly stupid that, perversely, it feels childish to criticise it.

In terms of the overall narrative "Gambit" is something of a waste of time. Blake enters looking for a man to find the location of Star One. He exits looking for a different man to find the location of Star One. It is, to use a Shakespeare quote, 'a tale told by an idiot, full of sound and fury, signifying nothing'. But what sound and fury. There are so many reasons to hate this episode, but once it comes to pure entertainment value I have to admit it's pretty great stuff.

Seven good episodes out of 11 gives Season 2 a quality ratio of 64%, with two more episodes to go.
Posted by Grant at 6:52 PM