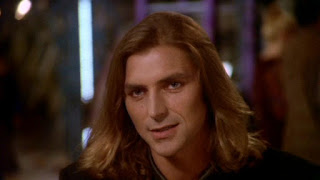 As John Sheridan (Bruce Boxleitner) prepares to be inaugurated as the President of the new Interstellar Alliance, a disgruntled Earth Force veteran is planning his assassination. Captain Elizabeth Lochley (Tracy Scoggins) begins her first day as Babylon 5's commanding officer, and promptly encounters a group of rogue telepaths seeking refuge on the station.

Season 5 begins in the weirdest place. It feels strikingly different to Season 4. It's not the execrable new opening titles and theme - although it must be said that this season has the worst opening titles Babylon 5 ever had - it's basically the fact that everybody is happy. There's a jaunty little tone to the episode. The series did such a good job of tying up all of its plot threads by the end of "Rising Star" that there's simply no ongoing crises left to care about. This doesn't feel like the beginning of a climactic final season. It feels, both tonally and in terms of quality, as if we're back near the beginning of Season 1.

When Babylon 5 was renewed for its fifth season by TNT, Claudia Christian declined to return as Susan Ivanova. As a result we get a new commanding officer for the station: Elizabeth Lochley. Obviously it's early days, but I'm not particularly impressed by either the writing or Tracy Scoggins' performance.  She comes across as relatively stiff and dull, which isn't a good thing if we're going to be watching this character for 22 episodes. She's set up with a bit of a mystery - she's not telling anybody which side she was on during the Earth civil war - but for now she's simply not that interesting to me. I do wonder just how late in the day Christian declined to return, since to a large extent Lochley feels like a find-and-replace effort in the script.

Her first day on the station brings her into contact with Byron (Robin Atkin Downes), the leader of a rogue community of telepaths seeking a permanent home. In this case the writing seems fine - or, at least, of a style and tone one would expect from J. Michael Straczynski - but the performance is dreadful. Downes is not simply stilted and wooden in his acting, he manages to come across as rather creepy as well. I'm not sure if that was the intention. I'm hoping he doesn't hang around, but my gut tells me I'm watching the beginning of the much-mentioned telepath war here.

Much of Byron's dialogue deserves a mention as well, since it's dominated by exactly the sort of overly florid writing from which I had thought Straczynski had largely moved away. I do think Downes gives a poor performance here, but it's arguably that nobody could have convincingly delivered lines like "the geometries that circumscribe your waking life, drawn narrower and narrower until nothing fits inside them any more" with wanting to storm off set and telephone their agent.

The attempted assassination of Sheridan feels like a writer running on autopilot. It's a highly generic plot to use, and there's nothing in it that feels original or that approaches it from an unusual angle. It winds up making the episode a chore to sit through, since there's nothing to surprise the viewer or particularly engage with them.

It used to be that even in Babylon 5's most tiresome episodes, an appearance by Londo (Peter Jurasik) or G'Kar (Andreas Katsulas) could be relied upon to lift things up a little and add some drama. Here both characters are weakly used for comic relief, and are written in an immensely retrograde fashion. This poor writing extends to much of the regular cast: Sheridan feels weirdly one-dimensional, while Delenn (Mira Furlan) acts like an overly concerned old-fashioned housewife. It's really only Garibaldi (Jerry Doyle) who seems to retain any of his spark from earlier seasons.

I have to wonder: what the hell happened? I know that the shift in networks must have been a little rough, and losing Claudia Christian was a bit of a blow. I also know that shifting the story originally intended as the season premiere back four episodes into Season 4 must have affected the story rhythm somewhat. None of that fully justifies just how poor this episode is. The title feels ironic: "No Compromises", attached to an episode that feels tremendously compromised. I'd been warned in advance by several Babylon 5 fans that I was going to hate Season 5. I'm beginning to see what they mean.
Posted by Grant at 5:01 PM