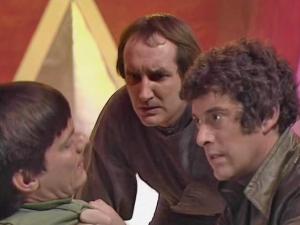 Blake (Gareth Thomas) travels to the colony world Albian, where the local Federation major may know the location of the relocated Central Control. His arrival coincides with a civilian uprising, which brings about a countdown to a bomb detonation that will kill everybody on the planet. Meanwhile Avon (Paul Darrow) is forced to confront his past when one of the rebellion leaders turns out to be Del Grant (Tom Chadbon) - a man who promised to kill him.

"Countdown" sees Terry Nation return to write for the series for the first time since "Pressure Point". While to an extent it's a case of 'spot the Terry Nation cliché' - an ice planet here, a radiation bomb there, a character named Del - it can't be denied that he's very effective at plotting these kinds of thrilling escapades.

The episode's central conceit is a neat one: the Federation kept the people of Albian in line purely by threatening to detonate a massive bomb if they resisted. When they did resist, the local major made good on the threat, started an irreversible countdown and condemned six million people to death. The episode therefore gets its own built-in deadline: a scant few hours to find the actual bomb, disarm it, and avoid getting wiped out. Actually a cursory examination of the digital countdown reveals they only had 16 minutes to save the day and not hours, but we'll let that one by.

It's not just the rebels who are on a deadline. Space Major Provine (a nicely unlikeable Paul Shelley) set off the countdown, but he's unable to cancel it. He's got the same deadline to open a set of bay doors and escape the colony in a rocket. At the same time Provine is precisely the man Blake is looking for to get intelligence on Central Control.

One more complication: the mercenary that the people of Albian hired to lead their revolution is the brother of Avon's girlfriend - a girlfriend who was tortured and died in captivity when Avon's final computer scam went wrong. Tom Chadbon (probably best known to SF fans as Duggan in the Doctor Who serial "City of Death") does a good job of playing the character, and he and Avon cross a lot of ground over the course of the episode.

It's nice to see a different side to Avon, and Paul Darrow does a wonderfully understated job of showing the character's rarely-seen romantic side. The fact that in failing to pull off his credit swindle he condemned his lover Anna to death will later become plot-critical to Avon's character, so remember this stuff: there'll be a test later (in Season 3's "Rumours of Death").

There's plenty going on here, and it all wraps up neatly by the time the credits roll. It's not the most original television ever made, but "Countdown" is slickly made and effective. It also sets the season off towards its final act: Central Control is now named Star One, and the only person in the Federation who knows where it is is a cyber-surgeon named Doccholi.

The only real downside to the episode is, unsurprisingly, the way that it sidelines Jenna (Sally Knyvette) and Cally (Jan Chappell). They've now spent half of the season sitting in the Liberator, wishing Blake luck and operating the teleport. Not only does it render the female characters as effectively invisible, it also wastes two really good characters.

We're nine episodes in, six have been good, so the quality ratio is 67 per cent.
Posted by Grant at 8:00 AM