Babylon 5: "The Deconstruction of Falling Stars" 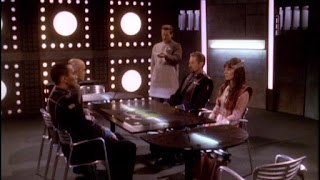 Well, that was certainly a thing. There was a season finale written and produced for Season 4, titled "Sleeping in Light", but when a last-minute deal saw TNT pick Babylon 5 up for a fifth season that finale was held back for a year. In its place, the production team hurriedly assembled this: almost certainly the weirdest episode of Babylon 5 thus far.

"The Deconstruction of Falling Stars" explores the future of the Babylon 5 universe, jumping 100 years ahead, then 500, then 1,000, and finally a million years beyond the lives of Sheridan, Delenn and the gang. The regular cast don't get too much of a look-in. Instead we've got a lot of people talking about them in rooms. It's a very cheap-looking episode, not to mention awkwardly written, slightly dull and generally pretty disappointing.

The episode's biggest problem is that there's nothing more for J. Michael Straczynski to say. "Rising Star" closed off the narrative. Babylon 5 was sold to its audience on the basis of a long-form story arc, and that arc is done. Three-and-a-half seasons for the Shadow War, and an extra half season for a "Scouring of the Shire" style Earth civil war. There's a certain enjoyment I suppose in seeing what happens centuries after the regular characters have all died, but it's basically trivia. There's nothing necessary here at all.

The first two sections of the episode are basically 'talking heads' debates. The first is a political chat show, and the second an academic debate. Neither are particularly convincing, and the dialogue in remarkably trite. There's a bizarre moment in the second one where a 140 year-old Delenn breaks into a television studio to berate the panelists. Nothing about these scenes work.

The third section sees a scientist revive Sheridan, Delenn, Garibaldi and Franklin as holograms for use in a propaganda war 500 years after the end of the series. It at least has some potential, but it's a potential lost by squeezing an entire story in between two commercial breaks. As a result it feels rushed and fairly trite.

The same problem affects the fourth section, in which monks living on the decimated remains of the Earth struggle to rebuild human civilization. There's a story here, but it's never given the chance to find itself. A final epilogue set a million years into the future is a cute capstone to the whole thing, but is hardly necessary - or, to be frank, particularly interesting.

This episode has an interesting concept behind it, but in execution is simply a bit dull. It's like a strange extra feature you'd find on a DVD, rather than a fully-fledged episode. It's a weird, disappointing end to what has been Babylon 5's most consistently enjoyable season. We're at the end now, 22 episodes in, and 15 have been good. The season's quality ratio finishes up at 68 per cent.
Posted by Grant at 3:05 PM