Babylon 5: "No Surrender, No Retreat" 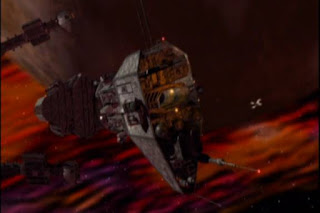 With a military blockade surrounding Proxima 3 killing more than 10,000 civilians attempting to escape, Sheridan finally takes matters into his own hands. Assembling the White Star fleet, he takes the blockade head on - either to liberate the Earth colony once and for all, or to die trying.

"No Surrender, No Retreat", an episode that shares its title with Season 4 as a whole, is an outstanding hour of television. It's basically a 40 minute war movie, but more than that it's an intelligent war movie. It actively tackles moral questions and doesn't shy away from the answers. It combines great moments of character with some exceptional action sequences. I don't think I'm exaggerating to call this one of the best episodes of Babylon 5 ever made. It's stunning stuff.

The last episode ended with Sheridan promising to bring all manner of furious hellfire down on the Earth Alliance. I honestly didn't expect his retaliation to hit quite so hard or so fast. By episode's end Proxima 3 is free from President Clark's blockade; what's more three of the five blockade vessels have joined Sheridan's fleet. A fourth has retired from the conflict. A fifth is destroyed during the battle.

The destruction of this fifth ship is a pretty big deal. This isn't the Shadow War, where Sheridan's fleet fought against an alien species. This is humans killing other humans. They're all supposed to be on the same side. Most of the dead were simply following orders. There's a blunt, horrible edge to that, markedly different from the abstract science fiction warfare the series has depicted thus far. In writing this episode's script J. Michael Straczynski forces Sheridan to confront that horror. The Clark administration is corrupt and illegal - that's not in doubt - but does Sheridan have the right to order the deaths of thousands of human beings to remove Clark from power? One imagines there's going to be all manner of fallout when this Earth civil war finally concludes.

The main battle sequence is about as effective a battle as I've seen on television. It's perfectly paced, well executed, and visually very well arranged. The CGI has, like much of Babylon 5, dated terribly, but it's put together with such integrity and attention to detail that it still works.

There's no fat to this episode. There are no dialogue heavy scenes dragging it down. There's one small subplot, which follows Londo Mollari's attempts to have G'Kar co-sign a statement of support for Sheridan's cause. It's a beautifully played pair of scenes that not only point to a growing trust between the former adversaries, but also refuse to shy away from the damage done. The hurt in both men's eyes as they speak is palpable. They contrast wonderfully against the battle sequences, and support them at the same time.

This was such a dramatic and effective episode, one that has me desperate to see what happens next. We're now 15 episodes into the season, and 10 of them have been good. The quality ratio rises to 67 per cent. By comparison, by the end of their respective runs I scored Season 2 at 64 per cent, and Season 3 at 68.
Posted by Grant at 9:50 AM